The latest in a long list of fascinating Label Resource entries is Taj of India. Many thanks to VFG member Jennifer Binns (Hollie Point) for her research and writing.

The brand Joyce developed, which arrived in stores in early 1961, was owned by Products of India, a business led by John D. Rockefeller 3rd. Rockefeller and his partners were motivated by more than profit. Products of India was established in 1959 as part of a larger cold-war era effort to develop consumer goods in India that would be palatable to American buyers. It was set up for the express purpose of creating a reliable export market for manufacturers in India while increasing the region’s industrial capabilities and promoting goodwill between the US and India. In short, it sought to expand the reach of capitalism in an area of the globe that was believed to be vulnerable to communism.

Thus, in keeping with the company’s political and philanthropic goals, Taj of India shoes were promoted to the American public as an altruistic means of fostering cultural exchange with a potential political ally while providing individuals who purchased them with an effortless method to help bolster the standard of living in India. However, despite their Indian-influenced aesthetics, the only part of the shoes that were manufactured in India was the fabric that composed the upper. The shoes were designed by Joyce, an American, The brass heels were made in Italy, and the finished products were constructed in New York.

The shoes were considered a luxury item and carried a high retail price tag. In addition to the US they were sold in international fashion centers such as Paris and London. The slippers sold well but Products of India ultimately failed to achieve its goal of providing aid to India via commercial ventures and the company was dissolved in 1967. However, the Taj of India brand changed hands in 1966 and for a few years the shoes continued to be made and sold under the name Taj Tajerie. Arnold Scassi designed for the label briefly in early 1970 but the company ceased production later that year. 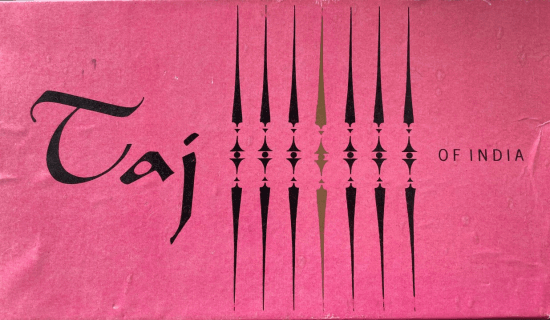 From a 1960s Taj of India shoebox lid

Both images courtesy of The Umbrella Lady