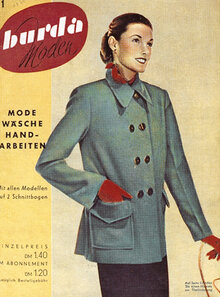 Burda Moden (or Burda Style as it’s called today) may not be as well known everywhere in the world—certainly in North America its rivals like Simplicity, Butterick and McCall’s are better known—but in Europe, and especially in German-speaking countries, the name Burda has long been synonymous with sewing patterns and making one’s own clothes. And it has long since outstayed its competitors like Beyer (which started several decades before), Neue Mode and Ullstein.

So how and where did it start? Burda’s origins are in the small city of Offenburg in Germany—not one of the big metropolises like Frankfurt, Munich or Berlin. And with one woman: Aenne Burda. She was married to Franz Burda, the owner of a printing business. He regularly had affairs, and when Aenne found out he had financed a small fashion publication for one of his mistresses, she knew what she wanted. She was 40 years old then, a mother of three boys, and had been looking for something to do. That something had to be an endeavor where her husband couldn’t tell her what to do. In exchange for not asking for a divorce, she asked for this publishing business to be given over to her.

In October 1949, Aenne Burda published her first fashion magazine, Favorit Moden. In January 1950 it appeared for the first time under the name Burda Moden, with two sheets of sewing patterns included. Aenne had always appreciated fashion and the finer things in life, knowing she wanted to better herself from the circumstances in which she had grown up (though she admitted she herself never sewed!). This is what she wanted to give her readers: a chance to dress well, even if money was tight, by making their own clothes. 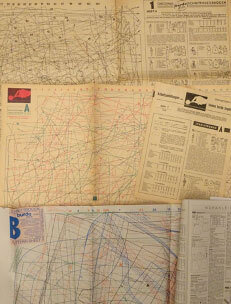 Burda Moden was a success from the beginning, and by 1952 patterns were also sold separately. From there, the company grew steadily and introduced innovations such as the color-printed pattern sheet. Whilst the pattern sheets included in sewing magazines were nothing new and can be traced back to at least the 1920s, they were always printed with black ink only, which despite the different dashed and dotted lines for different patterns, made it difficult to trace the right pattern. Also, the instructions were printed small on the side of these sheets. Burda changed this to a color print in the 1950s, with patterns printed in green and red, making it much easier to distinguish them. The instructions were printed separately.

From the 1970s onward, Burda offered the patterns sold independently from the magazine in two or three sizes in one, moving into a full multiple size range in the 1980s. Burda Moden not only offered sewing patterns for the entire family but also guides on how to sew particular items, knitting patterns, recipes, fashion and beauty features, advice columns—the ingredients of a classic women’s magazine. By 1967, Burda Moden was Europe’s biggest fashion magazine with 1.5 million sold—sometimes Aenne Burda was selling more than her husband with his publications, which included the celebrity magazine Bunte!

In 1961, Burda bought up their earlier competitor Beyer and later in the same decade, they even offered Vogue Paris Original designer patterns for sale through their mail order service and through appointed Burda dealers. These were very pricey though, costing about three times as much as the most expensive Burda patterns. In the 1970s, a talented young designer called Wolfang Joop worked for Burda.

Aenne Burda became one of the best-known women in Germany, and she enjoyed the good things in life, whilst continuing to run her business. Burda started to be published in more languages and more magazines were added to the portfolio: Anna, Carina and Verena for handicrafts like knitting, crochet and embroidery, themed issues of Burda for carnival costumes, bridal and evening fashions, children’s clothes and plus-size fashions; Burda International which featured lots of reports on runway fashions and patterns inspired by them; and Miss B, which featured easy-to-make trendy fashion for teenagers and young women. Plus sizes and petite sizes also featured regularly in Burda Moden. Separately available patterns also came under certain labels from the 1980s onward, such as “Burda super-easy” for very easy to make patterns and “Burda Couture” for elaborate evening and wedding gowns. More recently, Burda has also followed the trend started by Vogue patterns by reissuing vintage patterns from the 1950s, 60s and 70s.

The pinnacle of success was reached in 1987—both for Burda Moden and Aenne Burda personally. Burda Moden was the first Western fashion magazine allowed to be published in the USSR, and that was celebrated in style with a lavish fashion show in Moscow featuring top models like Christy Turlington, and Aenne was personally welcomed by Raisa Gorbacheva. What more could any fashion publisher have wanted to achieve at that time?

Aenne withdrew from Burda Moden in 1994 at age 85, and the publishing company was integrated into her son’s publishing empire. In 2001, Burda Moden was renamed Burda Style; Aenne passed away in 2005. The magazine and the patterns continue to be popular around the world. Nowadays, Burda offers a whole online community for sewers with tips and tricks, and individual patterns from the magazine can even be purchased online for downloading—besides the possibility of ordering patterns online for delivery by mail. The classic magazine is still published monthly, and the instructions and pattern part is a magazine-within-a-magazine that can be removed to keep.

Aenne Burda’s credo was “every woman wants to be beautiful” and that was what she offered her readers from the beginning. She had a good nose for what they wanted, offering patterns that were easy to work with, and for wearable clothes. Trends were adapted and presented in a way that they were accessible for everyone. Without being a fashion designer or a trained business woman, she became a big name in fashion and a female business pioneer!