Radley was a British clothing manufacturing company of the 1960s through the 1980s and owned by Alfred Radley. The company is best known for its association with the Quorum Boutique, of which it acquired controlling interest in 1969.

The designers at Quorum, Ossie Clark, and Alice Pollock, also did garments under the Radley label and many Radley garments borrowed design elements from the popular Quorum designers. The garment would be sketched by Clark, then Radley’s in-house designer would use the ideas to produce a variety of designs for Radley.

Rose Bradford was the designer employed by the Radley firm in the late 1960s to adapt the original designs of Ossie Clark into affordable licensed pieces under the Radley label (once they had come to the financial rescue of Alice Pollock and Ossie’s boutique, Quorum). Bradford seems to have been an extremely talented designer in her own right, designing under her own name for both the Radley and Quorum labels in the 1970s, but was always overshadowed by the many other designers Radley employed over the years. She is also rumoured to have wholly designed some pieces which were sold as Ossie Clark garments, as an experiment to see if this could work without Clark’s involvement. 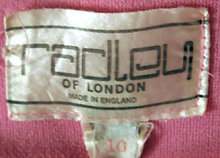 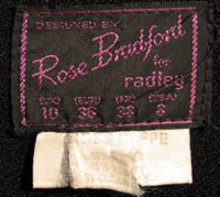 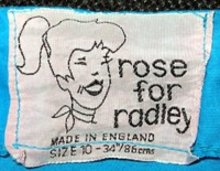