Quorum was one of the great London boutiques of the 1960s. It was founded by Alice Pollock in 1964. She was joined by husband and wife Ossie Clark and Celia Birtwell in late 1965. The clothes at Quorum were designed by Pollock and Clark, and they were often made from fabrics designed by Birtwell.

Quorum was known for their huge production fashion shows, which attracted the brightest stars of London – the Beatles, and friend David Hockney among them. The clothes were sensual and the feel was Bohemian.

Because of an ever increasing debt, controlling interest in Quorum was sold to Radley in 1969, but Pollock, Clark and Birtwell remained as designers into the 1970s. 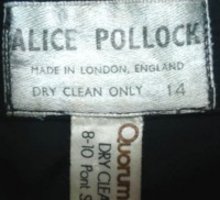 from a very early 1970s blouse

from a 1980s cocktail dress

Courtesy of artizania
← previous next →