The New York Dress Institute was formed in 1941 as a joint venture between the clothing manufacturers of New York City and the ILGWU. Under the leadership of fashion publicist Eleanor Lambert, Its purpose was to advance the sales of dresses and clothing made in New York by promoting the city as the fashion center of the country. The New York Creation label was used to identify the products of members.

In 1953 the New York Couture Group was formed by Ms. Lambert. These were not actually couturiers, but were thirty of the highest quality garment manufacturers in the city. Included were firms such as Harvey Berin and Maurice Rentner. The Couture Group began sponsoring what became known as Press Week, where fashion editors from newspapers across the country were brought to New York to see the latest fashions from the group.

The New York Dress Institute also began a Best-Dressed list, shrewdly taking over the task from Paris house Mainbocher when WWII shut it down. This list lasted into the 21st century. 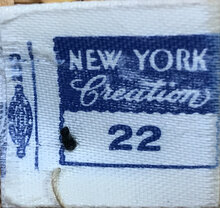