After leaving school, Claude Montana (b. 1949) moved to England. He settled in London and began his career by selling his own designs of opulent, bejewelled, papier-mâché jewellery. Featured in Vogue magazine yet sold in London’s street markets, this was the epitome of the 1960s youth culture.

By the 1970s he had returned to Paris and worked for leather manufacturer MacDouglas and by 1977 he had launched his own clothing collection, ‘Montana’.

In the 1980s the Montana style came into its own, with the emphasis on strong powerful women, as reflected in their clothing. An international reputation for strong masculine silhouettes, broad shoulders, shoulder pads, trim waists and leather jackets bejewelled with chains, rhinestones and buckles and bows! In 1989 he designed for Lanvin, but the relationship quickly soured and after three years Montana left the House, reportedly with millions in losses. Ironically, during his time at Lanvin, he won the prestigious Golden Thimble award twice, an unprecedented feat. Undeterred he quickly launched his new range Odysee, a keener priced label.

In 1999 he launched his affordable women’s range Montana Blu. His perfume and body fragrances ranges are internationally popular. 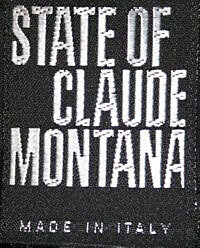