Until the 1920s, knitted sweaters were utilitarian or athletic items, not fashion statements. This all changed with Patou and Chanel in the 1920s, and with Schiaparelli in the 1930s. By 1933, Pringle of Scotland was making fashionable sweaters of cashmere, and they introduced the twin set shortly thereafter.

It took Hollywood to make the sweater a star. In 1937 Lana Turner appeared in They Won’t Forget wearing a tight sweater. The Sweater Girl was born!

In 1940, American designer Claire Potter included decorated evening sweaters in her collection. A year later, Mainbocher took British-made cashmere cardigans and decorated them for evening wear. Sometimes they were made as part of a dress ensemble, with the lining of the sweater matching the dress. They were decorated with beads, sequins, metal studs and fabric trim. This started a trend for decorated sweaters that continued into the 1960s. 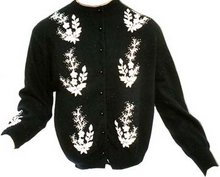 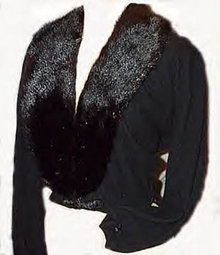 The evening sweater was an important part of the 1950s wardrobe. These sweaters were decorated in various ways: sequins, embroidery, appliqué, lace, beads, rhinestones and huge fur collars. A sweater would often exhibit a combination of these decorations. Many were lined in sheer, light-weight silk, sometimes with a layer of lace between the sweater and the silk.

Cashmere also became very popular for day. Many women had a twin set or two. A twin set was a pullover, often sleeveless or with short sleeves, and a matching cardigan. Sometimes the two pieces contrasted with coordinating trim. The sweaters often had jewel necklines to complement the string of pearls that many women wore with them.

From the 1940s and into the 1950s, teenage girls would wear their (or their mothers’) cardigans backward, buttoned up the back. College girls of the period bought twin sets as an important part of their college wardrobes.

Cashmere sweaters were knit not only in lovely solid colors, they were also knit in intarsia designs. Argyles were popular, as were flowers, butterflies and other designs from mature. There were often pretty details such as collars, matching mother-of-pearl buttons and contrasting satin trim.

Most 1950s sweaters had three-quarter, or bracelet, length sleeves. This sleeve length remained popular into the early 60s. Later in the decade, sleeves lengthened to cover the wrist.

What to Look For

There is much to choose from in the world of vintage cashmere. Many collectors focus in on the fancy evening cardigans. Look for beautiful beading in stunning color combinations such as black on red, pastels on white and copper on tan. There are lovely embroidered and appliquéd sweaters with flowers, fruits, insects and oriental motifs. Many of these embroidered sweaters have matching or contrasting satin edge bindings.

If you love fur, there are cardigans with big fur collars that snap on and off for cleaning. These cashmere-fur sweaters are commonly found in contrasting colors, such as a black sweater with a white collar. Sometimes they are dyed to match, often in great colors such as deep green or royal blue.

If these sweaters seem too fancy for your taste, there are plenty of plainer options. Solid color cardigans, jewel neck and collared pullovers, and turtlenecks can be found in practically any hue. If you like patterns, you might look for intarsia designs. 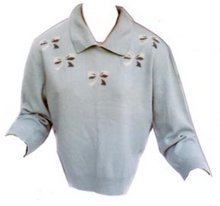 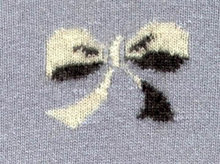 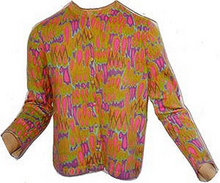 There have been hundreds of manufacturers of cashmere during the past six decade. “Made in Scotland” on the label is usually a sign of quality, as the Scottish mills such as Pringle, Ballentyne, Braemar and Lyle Scott produced (and in some cases, continue to produce) top-quality sweaters. Supposedly, the water in Scotland in which the cashmere fiber is washed makes the fibers softer.

Many sweaters, especially the highly decorated ones, were made in Hong Kong. In the late 1950s and into the 1960s, Hong Kong not only produced beautifully decorated cashmere, but also high quality lambswool/angora blends that are almost as soft as cashmere. Sometimes it is difficult to tell the difference if the tags are missing. 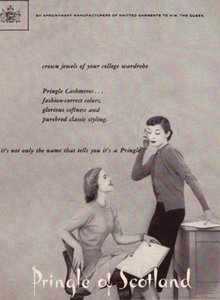 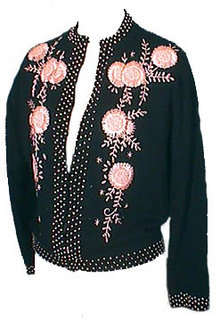 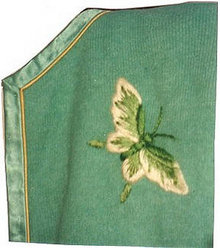 The two biggest American labels were Dalton and Hadley. It is fairly common to find Dalton sweaters that are two-tone; usually the sweater is a beautiful color with white trim. Scalloped edges were another pretty detail used by Dalton; they also made beautiful appliquéd sweaters.

Hadley manufactured cashmere and camelhair sweaters for many major department stores. They had one line called “Cashmere Souffle” that was 6- or 8-ply, compared to the usual 2- or 3-ply yarns used in most sweaters.

A very special find would be a cashmere sweater that was designed by one of the great designers of the period. Halston became known for his work in cashmere in the 1970s, but you should also look for the big names of the 1950s. Schiaparelli licensed a line of evening sweaters in the 1950s and 1960s: Some were cashmere with rhinestones or beads, but some were Orlon. Bonnie Cashin designed sweaters and skirts for Ballentyne, and later, for The Knittery. Tina Leser did a line for Dalton.

Many collectors look for sweaters by master decorators. Helen Bond Carruthers, Pat Baldwin and Edith Salzman are some of the best known and most highly collected. 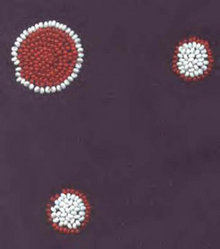 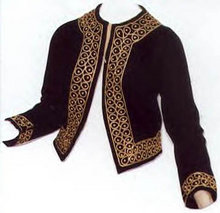 Evaluation of Quality and Condition
Or, All cashmere is not created equal!

Cashmere is made from the fur of the cashmere, or Kashmir, goat. Today, most of these goats are found in China, but they are also grown in Mongolia, Afghanistan and Iran. Sometimes fur is gathered from the back and legs of the goats. The quality of the harvested fur varies greatly depending on where the animal was raised, and also on which part of the goat’s body the fur was harvested.

The way to tell that you are getting quality cashmere is by feeling it. If the sweater is not super soft and light feeling, chances are that it is not the highest quality fur. Another sign of the highest quality, longer fiber cashmere is that it is not prone to pills: Those annoying little balls of fur that appear wherever friction occurs. Pilling happens most often on cheaper sweaters made from short fibers. The pills can be shaved or cut off, but chances are they’ll return. 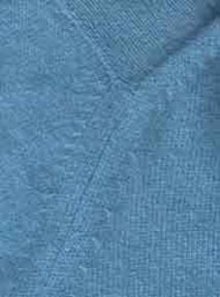 Another sign of quality can be seen in how the armholes were shaped. In a cheaper sweater, the sleeves were cut out of the knitted fabric to fit the armholes. The bodice of the sweater is also cut out and the two pieces are then sewn together. In higher quality sweaters, the armholes, shoulders, and sides of the bodice are “fully fashioned”. This means that the armhole, shoulder and sides are shaped on the knitting machine to fit together perfectly. The pieces are then sewn together. The result looks similar to the stitching on a baseball. These seams are sometimes called fashion marks. A good example of the fully fashioned armhole in a fine sweater is shown in the photo (left).

When buying vintage cashmere, be sure to check carefully for signs of wear and use. The most common problem with these great old sweaters is that moths love them too! Check the sweater carefully for holes. Tiny ones are easily fixed, but require the hand of an experienced mender.

A sweater that is heavily pilled will probably always produce pills. Look under the armholes for additional signs of friction. Sometimes sweaters look felted under the arms.

Check for stains, as old stains are difficult to remove, and harsh treatments such as oxygen powered cleaners are usually not good for the fur fibers.