In 1946, the deprivations of the war years were not far from anyone’s thoughts and budget. The power that women had gained in the past handful of years could still be felt in strong shoulders and trouser styles. Particularly in the hands of Parisian designers, there were styles presaging The New Look, including prints, colors, length, and extravagance. American designers devoted themselves to fashionable sportswear. Swimwear found fresh new directions.

I love the fashions of 1946. My appreciation doesn’t have so much to do with what was incubating in France. Instead, I am fascinated by the strength and freedom in women’s fashion, whether emanating from France or the U.S. It was the last hurrah of the war years styles, and in the best hands this fashion—on the verge of something very different—was fresh, modern and bold. 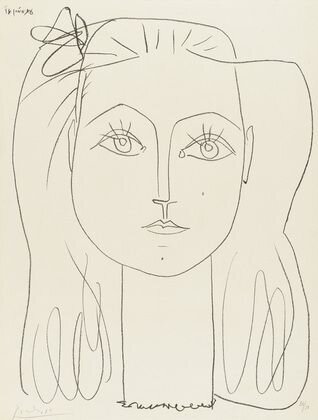 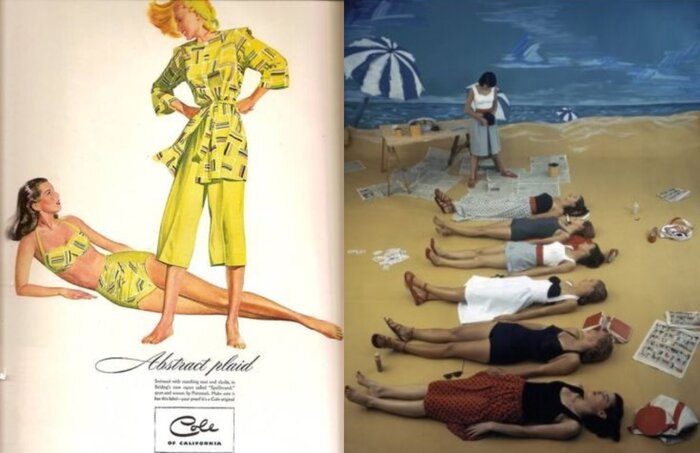 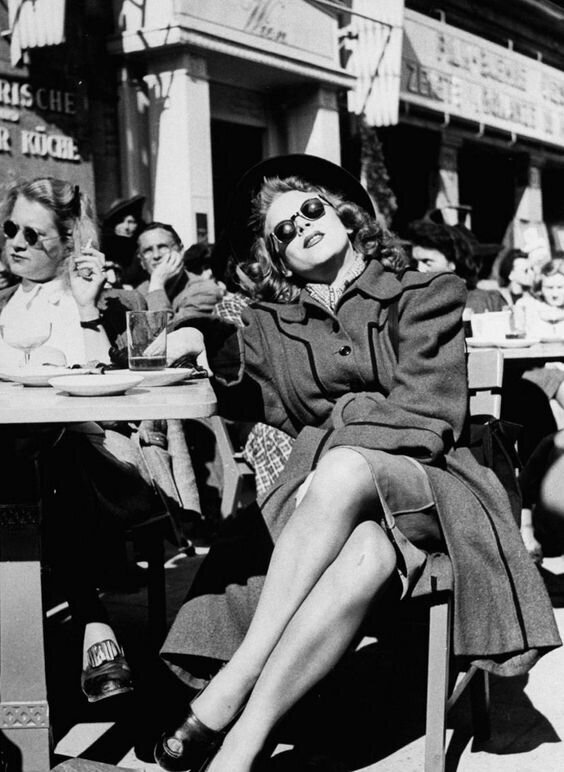 Even in Berlin, the war was over in 1946. Photo by Walter Sanders.

Women served invaluably during the war, and in this immediately post-war period, clothing reflected their collective strength with tailored, clean, well-accessorized looks for day and work.

By contrast peasant looks—ruffled, midriff-bearing, and feminine—made a softer impression for casual wear.

Shoulders reached an apotheosis, never (not even in the 1980s) to be so large again.

At the same time, shoulders were often bared for the classically elegant evening gowns of the year.

Victory rolls were a thing of the past, and long hair, whether worn loosely or sleekly piled high, was in vogue. Hats could be either over-the-top flamboyant or neat and rather handsome—a microcosm of the fashion extremes of the year.

Shoes ranged from flat and remarkably bare to tall and sleek. Grecian-style lacings were on trend.

June 1946, white high-lacing sandals from Delman and sheer stockings from Artcraft/Footwear, 1946/September 1946 Vogue, Baroness Reutern models her Italian thong sandals/“Make a fashion-point of leg-tan by wearing matched-tan leather sandals and, perversely, cover your arms to the wrist.” May 1, 1946 Vogue, photo by John Rawlings

With all the beachwear shown in 1946 you might think it was an exceptionally warm year, but it wasn’t. Instead, as Le Figaro wrote, “People were craving the simple pleasures of the sea and the sun. For women, wearing a bikini signaled a kind of second liberation. There was really nothing sexual about this. It was instead a celebration of freedom and a return to the joys in life” (quoted by Elizabeth D. Hoover in 60 Years of Bikinis).

The bikini was so named on July 5 of 1946, four days after the Bikini Atoll became the site of the first peacetime nuclear weapons test by the U.S. Louis Réard said he named his version of the revealing suit because it was “small and devastating” …like a nuclear weapon. Playsuits, sundresses and swimsuits stated loud and clear that the war was over, and the joy of going to the beach was back.

Leisure clearly was a theme in fashion, and central to women’s off-work fun was trouser dressing.

Really, it was a great time to be Claire McCardell. The American designer always came to fashion with women’s comfort, freedom and movement in mind. In 1946 she gave women classic, unfussy gowns, elegantly practical workwear, and brilliant sunsuits and swimwear. Show women of today McCardell’s designs from three-quarters of a century ago and they are likely to be surprised by the year—and wish they could wear the very same clothes now!