Here are some quick, easy-to-remember tips. They don’t necessarily place a garment in a specific year, but they will help you narrow down the time range.

KEEP IT TOGETHER – fasteners

Men’s dress trousers continue to have button flies through the 1940s.

Belt loops on men’s pants were first used in the early 1920s, coexisting with suspender buttons for years.

The modern metal zipper was invented in 1914 and used in galoshes and bags until 1927, after which they were also used in men’s trousers. They were not common in women’s dresses until the late 1930s.

Vintage slips, bras, and garters have metal hardware, not plastic.

The first practical sewing machine was invented in 1829 and was used to produce French army uniforms. Machines were not in common use for civilian garments until after 1845.

Machine chain stitch came first, followed by lockstitch. Lockstitch seams are rarely found prior to 1870.
Hand-sewn and machine-sewn construction (as opposed to hand-sewn finishing) coexisted for years – until the 1880s, if not later.

The zigzag machine was patented in 1873 by Helen Blanchard, but a model for home use, manufactured by Italian company Necchi, was not available to consumers until 1947.

The first overlock machine (serger) was patented by the Merrow Machine Company in 1889. Some still call all overlock stitches “merrow,” but only a 2- and 3-thread overlock is actually a merrow stitch.

The serger has been in use since the 1920s for seam finishing. This is the overlock or serged finish we still use today on cut fabric edges inside garments.

Loops for hanging found inside the neckline of vintage jackets and blouses are usually of European manufacture.

Hem tape generally indicates North American manufacture. It was never used in Germany.
Circle stitching inside the cups of a bra is a good indicator that it’s from the 1950s.

LOOK FOR THE LABEL

Look for labels in the side seams and hems of older garments.

Country-of-origin labels came about in the US following the McKinley Act of 1891.

The ILGWU (International Ladies’ Garment Workers’ Union) was formed in 1900. It joined the CIO (Congress of Industrial Organizations) briefly in 1937 and rejoined the AFL (American Federation of Labor) in 1940. AFL-CIO merged in 1955. In 1995, the ILGWU reformed as UNITE. Union labels reflect these changes.
The NRA Blue Eagle label, denoting compliance with Manufacturing Codes, was used in the U.S. from 1933 to 1935. The NRA was declared unconstitutional in 1935.

The U.S. National Labor Relations Act was passed in 1935, so these labels are seen after that date.
The Fur Products labeling act of 1952 required an accurate description of fur (e.g. what had been called Hudson Seal now had to be identified as sheared muskrat).

European (ISO/Ginitex) garment-care symbols were developed in 1958 and have been in inconsistent use since the early 60s (according to Ginitex).

The Textile Products Identification Act of 1960 (TFPIC) mandated the use of fabric-content labels in the U.S. It was intended to eliminate false advertising and the information was most often presented on a disposable paper hang tag rather than on a permanently affixed label in the garment.
Permanently affixed garment-care labels were required in the U.S. beginning in 1972. In the U.S., ASTM care symbols, with or without additional text, have been in use since 1997. American garments with ASTM care symbols are almost always modern.

A CUT ABOVE – garment construction

Watch pockets can be found on the waistline or waistband of dresses of the 1840s-1880s, and elsewhere on the dress bodice from the 1880s.

Cartridge pleating of the skirt at its waist is seen from the 1840s-1860s, fading out by the 1870s.
Tiny piped armhole seams date a garment to the 1870s or before and were rare after that.
Men’s suits lost their vest and became two-piece in the U.S. in 1942, due to the war effort.
Three-quarter and seven-eighth length sleeves were popular from the late 1930s through the 1950s.

Rayon, or artificial silk, is a semi-synthetic fabric processed from cellulose (wood) fibers. The process was first developed in France in 1855. Various formulations are known as viscose (English process), Modal, and lyocell. The name rayon was coined in 1924. It was used extensively for lingerie and dresses until the 1950s, when nylon became popular.

Nylon, developed by DuPont in 1938, was the first true synthetic fiber. First available to consumers in stockings in May 1940, nylon was not used in other clothing until after WWII.

Dacron (trademarked by DuPont) refers to several types of polyester yarn. Used in clothing manufacture from 1953.

Qiana, developed by DuPont, and commercially available since 1968, is a filament nylon used for woven and knitted fabrics. Its most familiar use is in the slinky disco shirts of the 1970s.

Spandex (known outside the U.S. as elastane) was developed by DuPont in 1958 and mixed with various fibers for use in lingerie since 1960, and in a wide range of clothing items since the 1980s.

The Woolmark symbol was first used in 1964.

Women’s European shoes from 1810-1830 rarely have heels while American-made shoes of that era often do.
Women’s shoes made in the U.S. and Europe from 1830-55 never have heels.
Shoes made from 1800-1860 only have right or left sole shapes if they were custom made to fit a client’s foot.

The Paris Point system (e.g. 38, 42) is used on European and Asian shoes. The U.S., England, and Germany use variations of the same sizing method ((e.g. 7, 8).Some countries that manufacture shoes for export sensibly mark shoes in the size system of the country they are shipping to.

Exotic leathers (crocodile, lizard, alligator) were commonly used for shoes during WWII because they weren’t rationed for the war effort.

Remember “croc has a dot, alligator not” when identifying skins. The dot is in the middle of the scale.

Sandals entered the shoe wardrobe in mid-1930s, first in Europe, then the U.S.

After the sandal came open-toe and sling-back shoes, in the late 1930s – never before.

Mules (open-back clogs) are likely to be European if they predate 1990. Though some were seen in the 1970s, they really weren’t popular in North America until the 1990s.

Generally speaking, shoes with round toes and Spanish heels (high, but thicker than a stiletto’s) are pre-1957.

Pre-1930s hats will normally have a hand-sewn lining.

Hats with interior grosgrain ribbons started in the early 1930s.

The last element of a pre-1930 hat to be completed is the lining. If there are threads sewn through the lining to anchor decorations, then those decorations are not original to the hat. 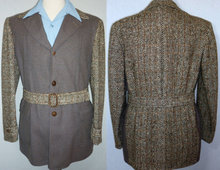 Courtesy of realgonevintage
← previous next →