During the end of the 1860’s when cage crinolines fell out of favor, half crinolines or “Crinolettes” began to appear. This would start the fashion for the large bustle during the 1870’s. It must be noted however, that most women did not want to give up the airy freedom of having unencumbered legs and were reluctant to give up the full cage crinoline in return for a bustle. It is because of this fact, that early 1870’s bustles often incorporate a narrow cage crinoline into the structure to free the legs and to hold out the hem of the skirt without the needs for layers of petticoats once again.

Bustles were also made out of a variety of materials as well such as tampico, horsehair, heavily starched or corded cotton or linen and even out of wire or cane.

By 1875, the bustle was at it’s largest and skirts over had over skirts, puffs, ribbons and drapery. Worn over a large bustle, created a cascading waterfall of fabric.

As the 1870’s drew to a close, the bustle diminished as narrow, slim fitting skirts became popular. A petticoat with stiffened flounces sewn at the back was sufficient and a vestige of the bustle is seen on late 1870’s and very early 1880’s dresses by a gathering of fabric at the back of the knees.

By 1881, there were rumors that the bustle (Tournure or “dress improver as genteel ladies called them) would return and by 1883 bustles were being worn again although they would be slightly more severe in styling the second time around.

The bustle of the 1880’s resembled more of a shelf protruding from the small of the back rather than the cascading waterfall look of 1870’s bustles and crinolettes. By 1885, they had reached their peak in popularity and size.

As the 1880’s drew to a close, bustles began once again, to diminish in size although they were not completely dispensed with. Although the bustle was shrinking, it was taking on another form and purpose for the next 20 years. No longer was the bustle going to be used to create an exaggerated backside, the new turn of the century bustle would be used create beautiful rounded hips and bum to contrast against a tiny wasp waist.

The new bustle were flat and crescent (stuffed with horsehair) shaped to mold closely to the figure and were worn from the 1890’s right to 1911 when the straight figure finally took over from curves. 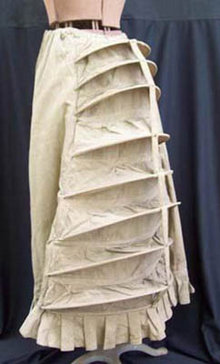 Courtesy of secondlooks
← previous next →