Zelinka-Matlick was one of the great suit and coat houses located on Seventh Avenue, New York in the mid-20th century. David Zelinka started his coat manufacturing business in 1929 and in 1935 he was joined by Max Matlick. They produced lovely tailored suits, often trimmed in fur. Zelinka and Matlick visited the Paris shows twice a year, but did not do direct copies. As David Zelinka put it, “I don’t care to retrace the mistakes of other designers. I’d rather call them adaptations or interpretations.’‘

In the 1960s Zelinka-Matlick was a pioneer in the then-new idea of exporting American fashions to other countries. They had agreements with around a dozen manufacturers in other countries who used the Zelinka-Matlick patterns to reproduce garments for retailing in their own country. The company closed in the mid 1970s. 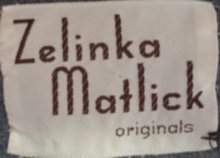 Courtesy of wyomingvintage
← previous next →