Wetherall was a British company founded c.1870 with manufacturing based in Denbigh, North Wales. It became a limited company in 1901 under the name Wetherall Bond Street W.I. Limited.

“The house came into prominence following the First World War with the Greatcoat. Women who had been in the services found feminine clothes just too feminine after uniforms. The Greatcoat, designed with almost military precision, was a compromise then, and is still appearing in international magazines.” (The Calgary Herald,1968)

By the 1930s Wetherall also had shops at 189 Regent Street in London, Liverpool and Oxford.
By 1947 Wetherall was advertising in UK magazines including Vogue, Harpers Bazaar and The Tatler and held both UK and US patents for their designs.

In 1948 it was announced that the US would begin making Wetherall’s famous four way suits and coats.
By the mid to late 1960s Wetherall had a range for young ladies called ‘Younger Wetherall’ and were using the Woolmark logo. They were also making ladies suits out of new man made fabrics branded Crimplene and Terylene.

In 1968 the brand’s goods were being sold in Calgary in Canada, and had previously been sold in Vancouver and Victoria. Articles included reversible capes, coats, suits, skirts, blouses and hats.
The brand was trademarked as Wetherall Limited in the UK in 1972, and the US in 1973 by which time the product range had expanded to include ladies and girl’s coats, suits, jackets, shirts, dresses, blouses, slacks, sweaters, cardigans, capes, hats, waistcoats and tunics.

At the height of the brand’s success Wetherall had 80 concessions (shops within shops), 22 of their own stores and had shops on Cunard liners including ‘The Queen Mary’.
Business declined and in 1992 a competing business called – who already made reversible ladies outerwear that was run by Welsh businessman Roy Johnson bought the Wetherall brand and changed their own company name to Wetherall. Since then the business has grown with more than half the business from mail order and about a third exported.

As of 2013, the company has over 30,000 mail order customers – some 50 of them are ladies with titles. Over 90% of Wetherall products are manufactured at the company’s own factory in Denbigh, North Wales. 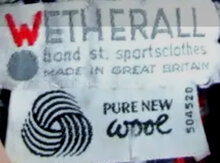 Courtesy of EBTH.com
← previous next →