Janice Wainwright (b. 1940) was born in Chesterfield in 1940 and studied at Wimbledon School of Art, Kingston School of Art and the Royal College of Art in London. Between 1965 and 1969 she worked for company ‘Simon Massey’. Her 1960s work was youthful, bright, and feminine. She was also, according to Judith Watt’s Ossie Clark book, the only other designer permitted to use Celia Birtwell’s printed textiles in the 1960s. Ossie greatly respected Janice as a designer.

In 1970 she started her own label, ‘Janice Wainwright at Forty Seven Poland Street,’ which continued until around 1974. Her Poland-Street-era work is what has become the signature Wainwright look — using wonderful jerseys, chiffons, and crepes for beautiful bias cut dresses, stylishly tailored suits, and glamorous top and skirt ensembles. At this point she also began to use embroidery extensively in her work, both in art deco inspired motifs and intricately designed birds and flowers.

From around 1974, her work began to bear the simpler ‘Janice Wainwright’ label, although sometimes the two labels turn up in the same ensemble, so they must have had a crossover period. Towards the mid 1970s, she continued developing her surface decoration techniques by using devore, satin ribbons, and simpler silver thread embroidery. In the late 1970s and throughout the 1980s she seemed to return to the simpler fabrics and shapes she favored in the 1960s, but continued creating beautifully flattering clothes. 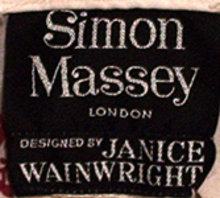 from a late 1960s mini dress/tunic

from an early/mid 1970s embroidered top