Valentino Garavani (b. 1932) studied fashion design in the late 1940s at the Accademia dell’Arte in Milan and at the Chambre Syndicale de la Couture in Paris. He became an assistant at Jean Desses in 1950, moved to Guy Laroche in 1956, and returned to Italy in 1959 to work for Galitzine.

In 1960 Valentino established his own salon on the fashionable Via Condotti in Rome. Two years later he did his first ready-to-wear collection. He also showed his collection at the Pitti Palace in Florence in the same year, a move which led to greater exposure and set him as a major Italian designer.

Valentino’s work is grand and dramatic. This makes his designs perfect as wedding dresses, including those of Jackie Kennedy to Aristotle Onassis (from the 1968 White collection) and Elizabeth Taylor in 1991 (her eighth marriage!).

Over the years Valentino has added various ready-to-wear lines, including ones for men, children, the home, and young adults, called Oliver. This line was named for one of his pug dogs. His labels and designs often have his trademark V incorporated in them and there is a special shade of red that is associated with Valentino.

Valentino retired in 2008, but his line continued for two seasons under the direction of Alessandra Facchinetti. Today the label is designed by Maria Grazia Chiuri and Pier Paolo Piccioli. 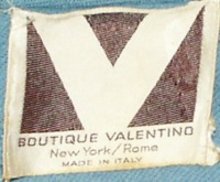 from an early to mid 1980s mens shirt

from a 1980s dress catwalkcreative

from an early 1990s jumpsuit 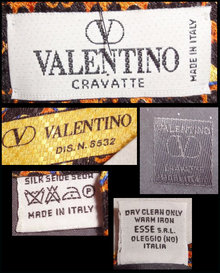