Utah Tailoring Mills was started in 1934 by Norm Bingham and Clyde Buehler in Ogden, Utah. The company made custom fitted clothing for individual clients. Sales representatives would show samples to their private clients, and each garment was made to order to that client’s measurements. The client’s name was even embroidered onto the dress label. By the 1950s, Utah Tailoring Mills had more than 100 employees in Odgen and 43 sales representatives all over the US. They became known for their use of Hollywood actresses as models in their advertising. In the 1970s, the average price for a Utah Tailoring Mills dress was $400-$500.

In 1977, Buehler sold his interest in the company to Norm’s son, Boyd Bingham. After Norm died in 1979, Boyd became the president. He took the company to an even more exclusive clientelle and raised the average price of a dress to $1500-$2500. During the 1980s and 90s, the company’s clients were mainly ultra-rich women whose identity was kept private. 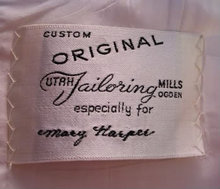 Courtesy of Couture Allure
← previous next →