Joseph Stein was a traditional coat and suit maker, founded in the early 1920s by Joseph Stein. When he retired in 1967, his sons David and Robert Stein ran the business. At that time, an effort was made to up-scale the company’s image. A designer, Muriel Reade, was hired, and the company branched out into dresses and knitted suits. The company was in business at least through the early 1970s. 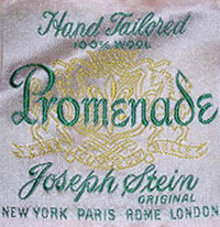 Courtesy of aprizeeverytime
← previous next →