Born in Dayton, Ohio in 1953, Sprouse interned with designer Bill Blass at the age of 14. Four years later, he enrolled at the Rhode Island School of Design – only to leave after a few months to pursue a career in New York. Sprouse then went to work with Halston, who was then at the height of his fame as America’s top fashion designer, and a reigning prince of Manhattan’s nightlife.

Sprouse burst onto the fashion scene in the early eighties with his sixties-inspired graffiti prints and neon mini skirts. His Day-Glo colors, all-black palettes, mirrored sequins, high-tech fabrics and Velcro attachments were different than anything seen before. In 1983, he opened his own business with money invested by his family. Retailers, rock stars and the fashion press loved his subversive downtown look, and in 1984 he earned the CFDA award for his energy and use of color.

But Sprouse’s business acumen never matched his creativity. Although his first two collections were hugely popular, he was out of business by 1985. In 1987 he opened shops in New York and Los Angeles only to close them down in 1988 due to a lack of financial backing. In 1992, Sprouse designed a line for Bergdorf Goodman and, in 1995, Barneys New York carried an exclusive Sprouse line. When Cleveland’s Rock and Roll Hall of Fame opened in 1995, Sprouse was asked to become the consulting fashion curator. In 1996, Sprouse won the rights to use Andy Warhol’s imagery on his clothing, which led to a deal with Staff International, an Italian company whose stable of designers included Vivienne Westwood. Sprouse returned to the runway in the fall of 1997 with a collection that paid homage to Warhol, although his license was not renewed when Staff was acquired by another company.

His graffiti took a starring role in the Fall 2001 Louis Vuitton collection, lending downtown allure to their iconic bags and luggage. The collection sold out immediately and once again catapulted Sprouse into the fashion limelight. In 2002, Sprouse designed a lower-priced line of red, white, and blue graffiti printed clothing and accessories for Target department stores. Shortly before his untimely death in 2004, Knoll had hired him to design textiles, and he worked on a line of t-shirts and jeans with Renzo Rosso, the founder of Diesel. 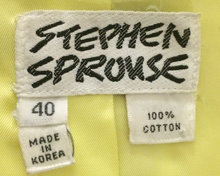 from a 1988 band sticker jacket 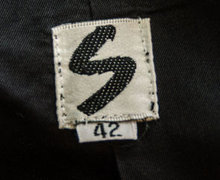 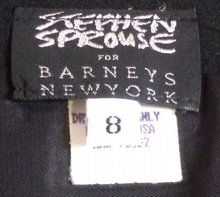 from a 2002 Sprouse for Target top