Apparel manufacturer Glazier Corporation was founded in Chicago by Michael (“Ike”) Glazier and his wife Charlotte (“Lottie”), apparently sometime between 1925 and 1935. The business was manufacturing ladies’ “shirt waists” (blouses) and a 1938 reference to the company indicated they were also manufacturing silk house coats. In 1961 founder Michael Glazier retired from Glazier Incorporated and his sons continued to manage the business.

Son Edward Glazier (1914-2006), a graduate of Northwestern University and Northwestern Law School, became the president of Glazier Corporation’s Rothley, Inc., at 307 W. Van Buren Street in Chicago. In the late 1930’s and early 1940’s ads appeared for myriad lounge wear for relaxing at home, such as robes, pajamas, slack suits, etc. And just to make it easier for milady to powder her nose while lounging in her pajamas with her guests, in 1939 Rothley, Inc. filed for a patent for their “Three-piece compact pajamas.” The pajamas weren’t compact, but came with a clip-on compact that doubled as a belt buckle. According to an ad for the set, it included “a regal full length coat (robe) over a smart blouse and darling trousers”—and the belt clip compact, of course.

The proliferation of loungewear produced in the 1940’s included slack suits of a blouse or hip-length fitted jacket and wide-legged “flaring” trousers (“for easy, carefree lounging”), a three-piece “Brunch Suit” of a robe over pajamas (“for easy comfort and usefulness”), “Fireside (lounging) Suits” of snugly suede (“You’ll laugh at oil rationing”), and plush “Snuggle Robes” (“Scarlett O’Hara set a precedent”), among many others.

In 1966 Ed Glazier, Rothley Inc. head, announced the purchase of a the former Taylorville Garment Company plant on Rte. 48 in Taylorville, Illinois. The plant, it was announced, would produce Rhapsody Loungewear and Charlotta of California fashions for Rothley, Inc.

Until at least 1975 classified ads appeared for the Rothley, Inc. sewing factory in Taylorville and in 2006 Rothley, Inc. president Edward Glazier died. 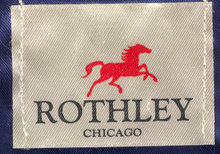