Roecliff & Chapman Model were a British ready-to-wear company producing high end womenswear in the late 1940s and into the 1950s. They appear not to have existed after the late 1950s, as there are no references for later dates.

Labels state they were based at Grosvenor Street, Mayfair, London, UK, a high end address. They specialised in women’s eveningwear and ballgowns as a number of advertisements of such are readily available online. These advertisements featured in high end fashion magazine such as The Lady and Vogue. In such advertisements the company described themselves as “wholesale couturiers”.

Please note, the correct spelling is Roecliff & Chapman, although they are often referred to as “Roecliffe & Chapman” or “Roecliffe Chapman”; the confusion is likely due to how the ampersand appears on the label. 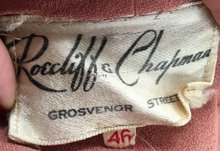 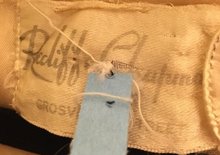 Courtesy of Carnivale
← previous next →