Jill Richards was an American designer from California, active from 1970 to the 1990s. Known for very feminine clothing in luxury fabrics, she was nicknamed “Ruffles Richards,” and counted among her clientele Hollywood stars as well as Nancy Reagan, perhaps because, as a former actress, she understood lighting and had a flair for drama. The L.A. Times noted in her obituary that “[s]he was one of small group of Los Angeles designers who helped expand the California market beyond swimsuits and shorts. She made evening gowns and special-occasion clothes in such luxury fabrics as silk, velvet and lace.”
In an interview with the L.A. Times in 1986, “She said she learned the basics about style while working as an actress in her 20s. ‘When dressing someone for the screen you may drop a little bit of what’s happening in fashion to flatter your lady.’

“Nearly every one of her collections included a version of her ‘Kitty Foyle’ look, a dark-colored dress or suit with a white collar that was inspired by an outfit Ginger Rogers wore in the 1940 movie of the same name.

“I use a lot of white close to the face. It reflects light like the ‘key light’ they give you on the set,” Richards said in the 1986 story, referring to the device photographers use to define a shape or silhouette.

“Richards’ client list glittered with socialites and movie stars, including Nancy Reagan when she was first lady of California in the 1970s and actress Victoria Principal in the 1980s. Richards’ designs were sold at Saks Fifth Avenue and other specialty stores. Richards closed her fashion business in the mid-1990s.”

Another Times article, reviewing one of her collections in the 1980s, commented that Richards’ trademark look was “glamour mixed with a bit of body camoflauge.”

She was born August 29, 1921 in Cleveland, Ohio; her family moved to California, where she graduated from Beverly Hills High School. She became an actress, landing small roles in movies and television. Jill Richards died in L.A. at the age of 85 in May 2007. 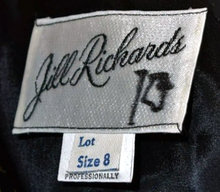 Courtesy of ysabelvintageonline
← previous next →