The Red Cross Shoe Company began originally as U.S Shoes started in Cincinatti, OH in the 1870s when all shoes were made the same way – no difference in width size or specifics of that nature as well as no specific brand names for shoes. Their descendants were the founders of the Krohn-Fechheimer Shoe Company (began 1896) which produced Red Cross shoes. Irwin Krohn was a believer in brand names, with which customers could identify and that were easy to advertise. By the mid-1890s the name Red Cross was a well-known brand. It originated with a red-haired merchant named Cross, who christened his tomato ketchup Red Cross. This name caught on rapidly and was soon used on other products.

Red Cross women’s shoes, advertised as the “noiseless” shoe, caught on as quickly as had Red Cross ketchup and brought the firm of Krohn-Fechheimer much prosperity. However, the modest but growing companies of Stern-Auer and Krohn-Fechheimer suffered setbacks in the aftermath of World War I. The boom years of the war quickly gave way to economic recession and inflation, and high-topped women’s shoes, in vogue for generations, had gone out of style. This brought a need for serious adjustments, which were stymied by a six-month strike in the Cincinnati shoe industry in 1921. A local industrialist, Lewis S. Rosenthal, initiated a proposal to merge eight Cincinnati-area shoe firms, including Krohn-Fechheimer, into the United States Shoe Company. The future looked good, as the Red Cross shoe brand was still popular, and the economy had begun to recover. By 1939 the Red Cross shoe had become the most popular brand in the United States.

U.S. Shoe began diversifying by the mid 1950s and started making different lines of shoes, including COBBIES, Joyce, Socialite, and also acquired Selby shoes. Between the 50s and the 1980s it expanded into global markets and the clothing and shoe division of U.S. Shoe by 1989 was the second-largest group of women’s apparel stores in the United States, almost all of them located in shopping malls.

In February of 1989, The Associated Press reported that U.S. Shoe Company was offering its entire footwear division for sale for over $4 million. By the 1990s, most of the US Shoes was operating “solely” by its largest division, not footwear but optical namely LensCrafters. 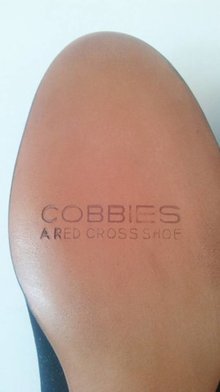 Courtesy of thevintagestylist
← previous next →