Lilly Pulitzer started making her famous dresses in 1960. She and her dressmaker designed the original little cotton print shift dress to hide the stains she acquired working in her Palm Beach, Florida fruit juice stand. Before long, people were asking about the dress, so Pulitzer began selling the dresses at the stand.

She got a tremendous boost when the first lady, Jackie Kennedy, was pictured in Life magazine wearing a Lilly Pulitzer dress. By 1961 she had a lot more orders for her “Lilly” dresses than for juice, so she closed the stand and opened Lilly Pulitzer, Inc.

Her dresses were brightly colored and often whimsical prints that usually incorporated her name, “Lilly,” somewhere in the design. These dresses proliferated nationally throughout the 1960s and 1970s. The fabrics were actually designed by Suzie Zuzek, and were printed by Key West Hand Print Fabrics.

The earlier dresses are 100% cotton. Key West handprinting was used to produce some of the fabrics. Sometime in the mid to late 1960s Lilly Pulitzer started using a 65% Poly/35% cotton blend. In the 1970s she did some garments in 100% poly knit. Also, Lilly Pulitzer did a little girl’s line, named for her daughter, Minnie, and a junior line named for daughter, Liza. A men’s line was added in the early 1970s.

Lilly retired in 1984, but the business reopened in 1993. Today Lilly Pulitzer fabrics are named and the company has branched off into accessories and shoes. The emphasis is still on the original bright colors and whimsical prints introduced by Ms. Pulitzer in 1960.

Direct from Lilly Pulitzer© : “There were a few different labels in the early years including green and orange. The changes were more likely whimsical modifications than major branding strategies. Unfortunately, when Lilly Pulitzer retired in 1984 to spend more time with her family, a lot of documentation was lost so we are unable to provide fully accurate information on specific dates and changes such as these. We can tell you that after the brand was revived, the current label (which is actually a dark navy font on the ivory background) was introduced in the spring of 1994.” 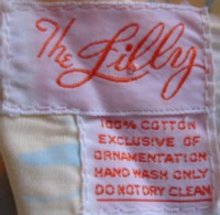 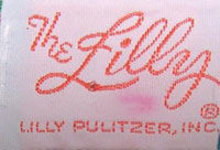 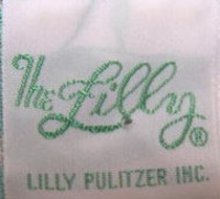 from a 1970s swim suit hangtag

Courtesy of pf1
← previous next →