Emilio Pucci, a skier himself, designed a line of ski clothes for the American sportswear company White Stag in 1948. The next year he opened his first boutique on the Italian island of Capri. His design house, Emilio of Capri, was established in 1950 and was located on Capri, Italy and later in Florence, Italy, with boutiques in Rome, Elba, and Montecatini.

Pucci designed fabrics for the swimwear house Rose Marie Reid in the late 1950s/early 1960s. In 1960 he formed a relationship with Formfit Rogers, designing lingerie and at-home wear made from nylon tricot. By the 1960s his signature look reigned as the ultimate status symbol for the decade. In the late 1960s he designed the uniforms for the stewardesses of Braniff International Airline. In 1968 he began designing menswear for Ermenegildo Zegna.

Pucci is known for his fanciful and psychedelic prints, especially in silk knit and in cotton velvet. His prints are signed “Emilio”, rather than “Pucci”. Emilio Pucci died in 1992 and his daughter Laudomia Pucci took charge of the company. From 2002-2005 the collections were designed by Christian Lacroix. Starting with the Fall 2006 collection, the designer was Matthew Williamson. He was replaced by Peter Dundas in October 2008.

from an early 1950s swimsuit

from a 1960s bathing suit cover-up 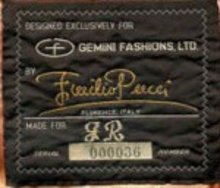 from a late 1970s nightgown