Nordstrom was founded in 1901 by John W. Nordstrom. Using his $13,000 stake from the Alaska gold rush, he started a shoe store in Seattle, Washington with another Swedish immigrant, Carl Wallin, a shoemaker he had met in Alaska. The shop was called Wallin & Nordstrom.

Business grew, and a second store was opened in 1923. Five years later, John Nordstrom retired, passing his business over to his sons Everett and Elmer. The next year, Wallin passed his share in the business to Nordstrom’s sons. In 1930 the stores were renamed Nordstrom’s.

The sons, now joined by John’s youngest son Lloyd, successfully grew the business even during the Great Depression and WWII. Postwar saw Nordstrom’s becoming the largest independent shoe chain in the country, with new stores in Portland, Oregon, and suburban Seattle. Nordstrom’s success was based on having a full range of sizes, extraordinarily large inventory, and excellent customer service.

By the early 1960s there were eight Nordstrom’s stores, and 13 shoe departments that Nordstrom’s leased through Washington, Oregon and California. The company had 600 employees and grossed $12 million in 1961. The brothers purchased Seattle-based Best’s Apparel in 1963, and Portland’s Nicholas Ungar in 1966, with an eye on diversifying their inventory. In the mid to late 1960s stores were built to sell shoes and apparel, adding men’s and children’s departments. In 1967, the company was renamed Nordstrom Best.

The next year saw the retirement of the Nordstrom brothers, as they handed over control to the next generation, sons James, John and Bruce Nordstrom, a son-in-law, John A. McMillan, and a family friend, Robert E. Bender.

In 1973, when sales first topped $100 million, the firm’s name was once again changed, this time to Nordstrom. That same year came the first outlet shop, Nordstrom Rack, in the basement of Seattle’s flagship store. In 1976, the smaller Nordstrom Place Two stores brought select fashion items to smaller markets. In 1978, Nordstrom successfully expanded into California, and sales reached $300 million.

During the 1980s, Nordstrom expanded its existing stores, and expanded its territory to the Eastern U.S. In 1988, the first East Coast Nordstrom store opened near Washington D.C. By the late 80s, many a tale could be told about the beyond-the-call customer service at Nordstrom stores. the 21,000 employees of their 58 stores sold $2.3 billion in goods in 1988.

In the 1990s, the third generation Nordstrom men from 1968 were still holding the reins. Growth slowed due to the early 90s recession, and most growth came from opening new stores, including in the Midwest, South and Northeast. Nordstrom had been the U.S. distributor for the French company Façonnable, and in 1993 they opened a New York men’s boutique by the name Façonnable. In 2000, Nordstrom acquired control of the Façonnable brand and its boutiques, mainly in Europe.

In 1995, four of the co-chairmen retired and after a brief time with non-family chairmen, six fourth-generation Nordstrom family members joined the management. Under a non-family member, John Whitacre, merchandising initiatives were ineffective, and once again Nordstroms were in charge.

Nordstrom continues today, opening a second flagship store in New York in 2019 (the original is still in Seattle). The firm is still in the hands of the fourth generation of Nordstroms. 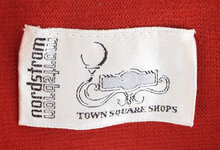 from a mid-1970s sweater jacket 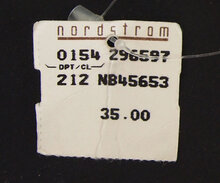