Thierry Mugler (1948-2022) planned to be a ballet dancer, but after growing bored with dancing, he gained employment as a window dresser and design assistant at a Parisian boutique. He then went to London where he designed for Andre Peters in 1968 and 1969. By 1971 he was back in Paris, where he designed a line called Cafe de Paris.

The Thierry Mugler label was launched in 1973-1974. His clothes were influenced by the glamour of the past – with a hint of 1940s Hollywood or a 1950s sex symbol, but with a harder edge.

In 1992 Mugler introduced a couture line which ran until 2000. He sold his ready-to-wear division to Clairins and clothing made after this time has been made under license. Today the Mugler name is mostly associated with his famous fragrances.

In 2008 the Mugler line was revived under the direction of Rosemary Rodriguez. The line, Thierry Mugler Edition, was made up of thirty-five pieces, all from the company archives and up-dated by Ms. Rodriguez. 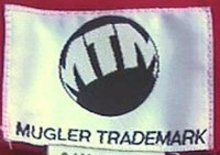 Courtesy of pf1
← previous next →