During these first years at Townley, McCardell began to develop what she referred to as “McCardellisms” – the signature touches that she turned to again and again: bias cutting, metal hook fasteners, wrap tie fasteners, and asymmetrical closings. The Townley Frocks label of the 1930s says “Townley Frocks” and has a picture of a woman golfer swinging her club.

Her first huge success came in the fall of 1938. This was her Monastic dress, a dress that had no front, back, or waistline and that tied to suit the wearer. This dress was originally produced for Best & Co., who marketed the dress as the Nada Frock. Its success led to its inclusion in the Townley line.

Because of financial and legal problems (due in part to the rampant copying of the Nada Frock), Townley was forced to close in 1938. McCardell was offered a job at Hattie Carnegie, designing a line called Workshop Originals. McCardell’s casual style did not mesh well with the more glamorous Hattie Carnegie image, so she left in 1940. She went to work for Win-Sum, a line of low-cost clothing.

Townley reorganized and reopened in 1941. McCardell was made head designer at Townley under the condition that her name be put on the label. She stayed there until her death in 1958. During that time, McCardell became recognized as a true American original. In 1955 Time magazine did a cover feature on McCardell. In the article, Stanley Marcus was quoted as saying, “She is one of the few creative designers this country has ever produced.”

Many of McCardell’s designs have a timeless quality. This was because she was not trying to reinvent the dress twice a year, but, rather, she kept the design ideas that worked for her and that were comfortable and versatile.

“I’ve always designed things I needed myself. It just turns out that other people need them too.” Claire McCardell, 1955

Label Note: In 1996 a New York company produced a line of clothing labeled “Claire McCardell.” This practice was challenged by the McCardell family and the company, which had closed anyway, agreed to stop production. See last label. 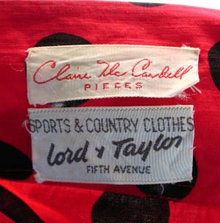 Courtesy of gladragsandcurios
← previous next →