Lord John was opened in Carnaby Street by brothers Warren, Harold and David Gold in 1963. The name of the boutique led to litigation with the crowned King of Carnaby, John Stephen. People still think Stephen owned the shop thanks to a lot of inaccurate write-ups in books on the swinging sixties. Another reason for people failing to realise that John Stephen was not the owner could be that the fashions sold at Lord John were amazingly spot on with the fickle mod crowd of the era, which is a startling achievement for a group of brothers who are unknowns in the fashion world even today. Ever in step with the new trends, they even commissioned David Vaughan to paint a mural for the shop when he was still a relatively unknown artist.

The shop was instantly popular with the mod crowd, and even more popular with the music elite of the day. Mod fashion inspirations The Small Faces had an account there, The Who often went there for their stage gear, and Brian Jones of the Rolling Stones was another regular client. The shop was so raved about that when Micky Dolenz of the Monkees visited Britain in 1967 he fought his way through a crowded Carnaby Street just to buy six suits from the shop.

The fashions in Lord John were not just the continental cut men’s suits that made the mods famous, but also far out men’s fashions such as brightly coloured shirts, hipsters, ski sweaters, and jackets in suede, corduroy and denim. Another thing Lord John was famous for was for providing the newest fashion trends almost as soon as they appeared… thanks to the perfect location on Carnaby Street, Lord John was able to provide unusual new items such as Kaftan jackets as soon as they were spotted in John Stephen’s neighbouring shops. 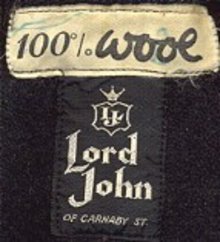