Norma Kamali (b. 1945), a native New Yorker, graduated from the Fashion Institute of Technology in 1964 with a degree in fashion illustration. Four years later she opened a shop and designed for Kamali Ltd for ten years. In 1978, after her divorce, she founded OMO (On My Own).

Her early works were typical late 1960s: appliquéd leather, lizard and snakeskin. In the 1970s her design style evolved and she began making draped, shirred, garments with alternative fabrics. The jumpsuit made from silk parachute material and her famous “sleeping bag” coat put her on the fashion design “A” list. Other fabrics, such as sweat suit material that had previously been reserved for athletic wear, were used by Kamali in high-fashion pieces. In fact, she has been credited with the return of the mini skirt when she began making them from sweatsuit fabric in the early 1980s. Another fashion innovation was her high-heel sneaker. The Kamali swimwear collection is highly anticipated every year and remains as popular as ever since her first collection in 1974.

In 2006 she introduced the contemporary Kamali Everlast sportswear line. These packable, changeable, versatile pieces have been extremely successful. She has also recently introduced a line of beauty and wellness products using natural “handed down” recipes and homeopathic remedies.

Norma Kamali has made many contributions to the fashion industry with multiple awards and a plaque on the Fashion Walk of Fame. She has designed costumes for the Twyla Tharp Company and for the movie The Wiz. For over a dozen years she has also been involved in the New York City public schools where she dedicates time, helping to establish the art and commerce connection that will help create job opportunities for talented artistic students. 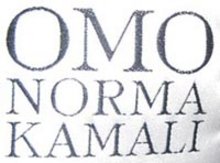 from a 2008 line for Walmart jacket

Courtesy of joules
← previous next →