When you learn the president of the Jeri Bee company was Jerry B. Oppenheim, it seems obvious how the business got the name, but in 1916, in Michigan, Jerry B. Oppenheim was born Bertram L. Oppenheim. The name change seems to have been firmly in place by the early 1940s.

In 1940 Bertram LeRay Oppenheim was working as a salesman for a Chicago womens’ wear wholesaler, “Miller-Wohl—Three Sisters Inc,” which manufactured women’s and misses’ ready-to-wear apparel. At the same time his widowed mother was the manager of a dress shop in Chicago.

World War II interrupted Oppenheim’s career when Bertram L. Oppenheim enlisted in the Army in 1941. In 1943 Jerry B. Oppenheim married during a furlough from active duty in the Aleutians.

A 1980 newspaper article, however, commented on Jeri Bee maternity clothes and quoted “Mike Oppenheim, president of Jeri Bee Fashions of California” when he observed the maternity dress market for mothers-to-be had increased 54% in the last six months. Mike Oppenheim was probably Jerry’s son, Michael.

That sales surge must not have been enough to sustain the Jeri Bee maternity-wear business and by 1983 ads began to appear for Jeri Bee square dance dresses, skirts, and tops. Jeri Bee of California was based in Los Angeles and ads for their square dance dresses were found only from 1983-1985. In 2008 Jerry B. Oppenheim died in Los Angeles and other than a 1990 ad for deeply discounted sales of Jeri Bee maternity clothes, no further information is available about the company.

from a late 1970s maternity dress 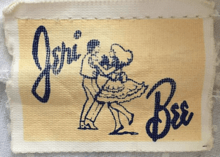 from a 1980s square dance dress

Courtesy of Michelle Jasek
← previous next →