Hubert de Givenchy (1927 – 2018) started his fashion career in 1945 with Lucien Lelong. He also trained with Robert Piguet, Jacques Fath, and Schiaparelli before he opened his own house in 1952. He was only 25 years old.

Givenchy was a great admirer of Balenciaga, with whom he had a very close personal and professional relationship. They influenced each other’s work, as is evidenced in the development of the sack dress in the late 1950s.

Starting in 1954 with the movie Sabrina, he designed for Audrey Hepburn and he continued to design for her throughout her career. The story is that Hepburn went to Givenchy’s couture house, looking for some dresses to wear in Sabrina. Upon hearing that Miss Hepburn was in the house, Givenchy assumed that the visitor was Katherine Hepburn. He was so busy preparing for his upcoming show, that he told her he could not design the outfits, but that she was welcome to look through the racks of clothing left over from a previous show. The clothes Audrey Hepburn selected went on to win a Best Designer Oscar (though the award went to Edith Head, as the official designer of the movie) and Hepburn and Givenchy went on to become the best of friends.

Givenchy did licenses early on in his career. He designed 23 Orlon sweaters for Talbott in 1955 and they were introduced at his spring 1955 Paris collection. In 1968 Givenchy started a ready-to-wear line, Givenchy Nouvelle Boutique. In the late 1970s, his Givenchy Sport line was widely worn on the Charlie’s Angels TV program. 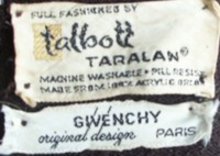 c 1965;NOT from Givenchy;prob from Korean tailor 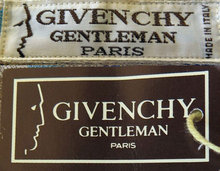 from a 1980s couture jacket 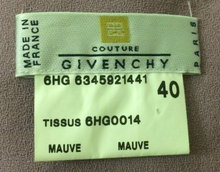 from a late 1990s pleated skirt

Courtesy of cjsredcloset
← previous next →