Fisba-Stoffels is mainly known for colorfully printed fine cotton handkerchiefs, but also produced silk scarves and tea towel calendars. Their products were sold around the world. The Fisba-Stoffels Taschentuch AG was founded in 1968 in St. Gallen by Patrick Stoffel and Christian Fischbacher Jr. Patrick Stoffel was its CEO until the company closed in 1988. What was left was taken over by the Fischbacher company.

The Stoffel family had been dealing in textiles and in textile production since the early 19th century. Patrick Stoffel’s father was Max Stoffel, who had been CEO of the Stoffel AG (formerly Stoffel & Cie), which had been incorporated in 1888 and for some time was one of the largest textile companies in the region. Starting in 1965, the company was gradually sold to Burlington Industries, except for their handkerchief production which was taken over by the new enterprise Fisba-Stoffels. Stoffel started with the production of handkerchiefs sometime between the two world wars, and these were well-known as “Stoffel-Tüechli” in Switzerland.

The Fischbacher company also has had its roots in the St. Gallen region since the early 19th century, and had introduced the production of handkerchiefs in the late 19th century. In 1940, their first international subsidiary, FISBA Fabrics Inc., was founded in New York. Further subsidiaries followed after the war, as well as connections to haute couture houses in Paris. In the 1980s, the focus shifted from fashion fabrics to home textiles. Today they are known for high-quality bed linens and fabrics for home furnishings. 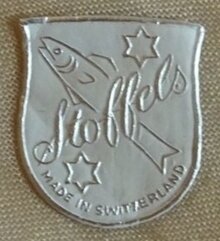 from a 1960s handkerchief

from a 1970s handkerchief 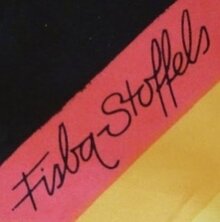 from a 1980s handkerchief