Fendi is an Italian family fashion business that began in 1918 with a fur and leather shop. Adele Casagrande married Eduardo Fendi in 1925 and changed the name of the company to Fendi in 1954 after the death of her father.

Adele, with the help of her five daughters, carried on to build the business. They worked closely with manufacturers, persuading them to be more innovative. They used unusual and forgotten pelts. They also introduced color to fur.

In the mid 1960s they hired designer Karl Lagerfeld. This proved to be a highly successful union. Lagerfeld designed their famous inverted double F logo. The direction of the company changed from a small luxury fur line to a high profile label synonymous with elite status. The fur collection became more fun and easy to wear. In 1966 their first couture fur collection was presented, followed by a ready to wear collection in 1969. Fendi leather goods were introduced to the United States through Bloomingdales Department Store, followed by other outlets.

The chic accessories of the 1980s and 1990s helped to expand their customer base to a new generation. The “baguette” leather handbag was a huge best seller for the company and the demand for their leather bags continues today. The Fendi third generation launched Fendissime, a line that includes not only furs, but also sportswear and accessories. This was soon followed by perfume and other licenses. 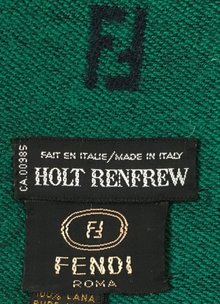 from an early 1980s wool scarf

Courtesy of Annabel Lee
← previous next →