In 1910 the name of the original Goodfellows store that was founded in Minneapolis in 1902 was changed to the The Dayton Company. In 1903 Goodfellows had been sold to George Dayton and renamed Dayton Dry Goods. At this time, the company stated it would be known as “Dayton’s”. most of the 20th century, the Dayton Company was one of the foremost department stores in the country. In 1962 the Dayton Company opened a discount store they called Target. The Target concept was expanded into a chain and became the mega-chain that Target is today.

In 1969 the Dayton Company merged with a Detroit department store chain called Hudson’s and the resulting company was called Dayton-Hudsons. These department stores eventually became part of Federated Department Stores and today the remaining Dayton-Hudson store have been made into Macy’s. 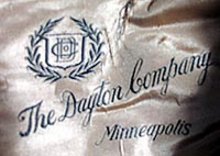