Daks started as Simpson LTD by Simeon Simpson in the late 1800s. The business was taken over by his son Alexander Simpson and in 1934 they introduced the Daks label. The label was invented for a new type of slacks that did not need suspenders, called “Daks Slacks”. By the end of the 1930s they had introduced a women’s line.

Daks were really popular in the 1940s through to the 1960s, but they were also expensive. With the success of DAKS slacks, Simpson decided to open a central London department store to sell their entire range, and Simpsons of Piccadilly opened in 1936. The store closed in the 1990s.

In 2007 Daks introduced a luxury line, which is designed by Giles Deacon. 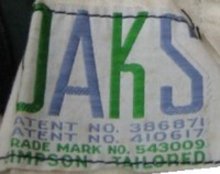 from a pair of late 1930s womens slacks 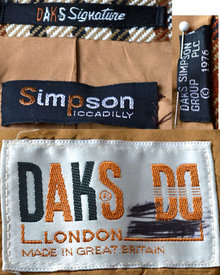 Courtesy of leonardodavintage
← previous next →