Ceil Chapman, as described by her son Peter, had design skills akin to engineering and indeed, if one studies her skillful draping and tucking and folding of fabric, it is clear as to what he meant.

Born in Staten Island (where the family maintained a home throughout her lifetime and beyond) she became a Chapman when she married her first husband Samuel, with whom she went into business in 1940, having previously set up a company with Gloria Vanderbilt, which traded, albeit briefly, as Her Ladyship Gowns.

The earliest Chapman label, ‘A Chapman Original’, endured for around three or four years until it gave way to the simple black on white, or white on black ‘Ceil Chapman’, which endured until a needle and thread was incorporated into the logo in the late 1950s to early 1960s. During their business partnership that ended in the mid 1960s, Ceil and Samuel divorced and she went on to marry Tom Rogers but she retained the Chapman name as it had built a following among both the public and movie stars.

Ceil is often said to be Marilyn Monroe’s favourite designer and although this may be rather a sweeping statement the star did indeed wear some Chapman designs, as did a variety of other stars such as Deborah Kerr, who was a personal friend, Elizabeth Taylor, for whom she designed a wedding dress, and Mamie van Doren, who chose a white, beaded, strapless Chapman gown to attend a film premier on behalf of Universal Studios publicity machine that was ‘marketing’ her as a star.

Ceil designed for the movies and television and specialised in cocktail and more formal evening wear. Although her clothes were not cheap she did manage to make them affordable to many and her label could be found in department stores and boutiques. Favourite fabrics included silk, taffeta, jersey, chiffon, organdy, cotton and metallic brocades often embellished with beads, lace and sequins. She tended to stick to fairly tried and tested signature styles and so her designs are easily identifiable but also often copied.

Ceil was astute and derived additional income by lending her name and stylish image for advertising purposes to include Cadillac, which featured elegantly Chapman-dressed models draped over luxury cars. Ceil even appeared, pictured in her studio, in advertisements on behalf of Western Union Telegrams and Playtex.

The business she ran with her ex-husband ran into financial difficulties in the mid 1960s and thereafter she designed dresses under the Ceil Chapman for Miss Winston label, which was a line targeted at the younger woman. 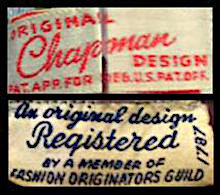 from a late 1960s cocktail dress

Courtesy of Meeloo Vintage
← previous next →