Chanel (1883?-1971) is known as one of the great influential couturiers of the 20th century. Gabrielle “Coco” Chanel got her start as a milliner c.1908. By the end of WWI she had set up a dressmaking establishment, making jersey knit dresses and skirt and sweater combinations. This was seen as new usage of jersey, which was considered to be a fabric for making man’s underwear. Her early designs set the stage for how she would approach fashion throughout her life – simplicity of design combined with function and comfort.

Her first true collection was presented in 1922. Throughout the 1920s and 1930s her clothes were simply cut and easy to wear. Early on she became known for her love of certain colors and color combinations, which today we consider to be “classics” – beige and black, navy blue, deep red and white. She was an early designer of the black dress; some say she was the creator of the little black dress.

During this period, Chanel also introduced some of the elements that can be found over and over in her designs. These include her use of faux pearls and stones, simple decorations such as bows and camellias, and the extension of the interior of a garment to the outside of it.

Chanel closed during WWII, but in 1954 she staged a fashion comeback. Her signature garment was a simple cardigan suit, which she continued to make until her death in 1971.

After her death, her design house floundered until the design job was given to Karl Lagerfeld in 1983. He has been very successful in incorporating the iconic elements of Chanel’s work into his own. Lagerfeld continues to design the Chanel collections, reinterpreting the look for which she was so well known – the Chanel suit.

from a 1920s coat (Adaptation, please read above) 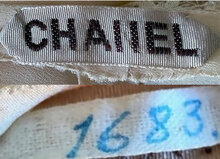 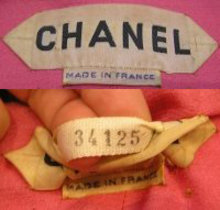 from a late 1960s couture suit

from a late 1960s couture suit

from a late 1960s suit (numbered behind label)

from a 1970s couture blouse 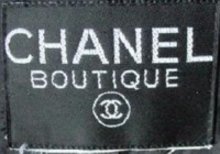 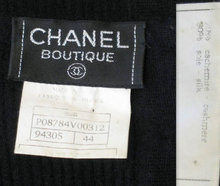 from a 1996 Autumn Collection sweater 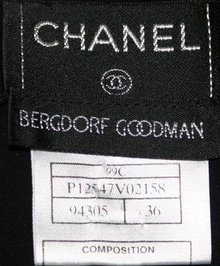 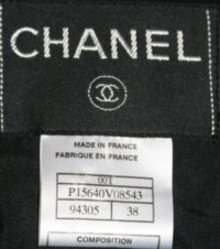 Check the spelling carefully. This is not Chanel. 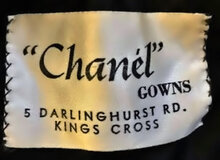 from a 1950s Australian-made dress, not authentic Chanel

Courtesy of GemGem
← previous next →