Fred A. Block was a Chicago based clothing manufacturer, starting probably in the 1920s. During the 1940s the company was also manufacturing costume jewelry to go with the clothing line.

In the early 1960s, the Fred A. Block company acquired the Marquette Shop, and in 1961 the name of the store was changed to Fred A. Block. The store sold both Block Originals and other makers’ clothing. This store was advertised as a discounter. It is not known when Fred A. Block went out of business. 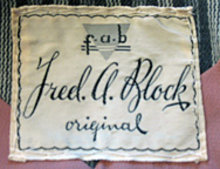