Mike Benet Formals was founded in the early 1960s in Pittsburg, Texas as a maker of prom dresses and formal gowns. In the 1990s, the company was sold by Jan and Mickey Crowell, the daughter and son-in-law of the founder. At that time the company relocated to Dallas, Texas. 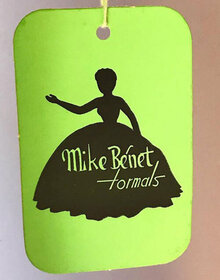 Courtesy of IntrigueU4Ever Vintage
← previous next →