Vitaldi Babani opened his House of Babani in 1895 as an importer of Oriental goods. Babani was located in Paris, on the rue haussmann, in the heart of the shopping district. The store was to Paris what Liberty was to London, selling a mix of fabrics, home decor and fashion, much of it inspired by the East, and all of it “Bohemian” in nature. Babani was known for their embroidered silk velvets, which look to be a variation on the stenciled silks that were produced by Fortuny around the same time. 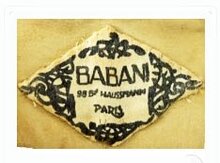 from an early 1920s dress and jacket