Bill Atkinson was an architect who got into the fashion business purely by accident. He made a square dance outfit for his wife from eight bandannas. The outfit was so popular that he started making them to sell. This venture was very successful, and he soon found a housedress maker, Glen Manufacturing, to make the skirt. This was in 1950.

For twenty years, Glen of Michigan made Bill Atkinson’s casual sportswear designs. In 1974, Atkinson started a new line, Bill Atkinson, Ltd., which lasted until 1982 when it was sold to a Canadian firm, Highland Queen.

“… Bill won the Coty award in 1978 because his clothing was so exciting and well designed. We took over a bank space and built an amazing showroom at 512 Seventh Avenue.
Bill retired from the business, moved to Westport, CT. He passed away at the age of 79 in 1995.” Mrs. Jeanne Atkinson 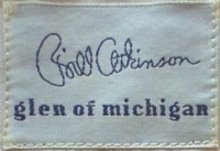