Mark Spitz won seven gold medals for swimming in the 1972 Olympic games at Munich. He retired after the victory, and became the first swimmer to have a licensing contract with a sporting goods company. The match was the brainchild of Horst Dassler, head of Adidas France and son of Adi Dassler, founder of Adidas. He had been dreaming of a competitive swimwear line and Spitz was the ingredient he needed to make it a reality.

Arena was launched in 1973 as a division of Adidas. Due to the death of Mr. Dassler in 1987, Arena was reabsorbed back into the parent company. Today, through mergers and buyouts, Arena International stands on its own and continues to produce competitive swimwear. 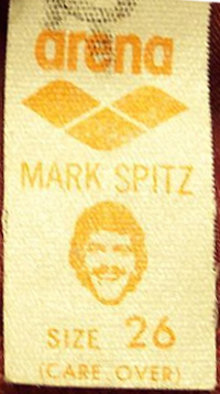 Courtesy of vintageclothesline.com
← previous next →