A haute couture house founded by Mme. Agnès ca. 1898. From the October 3, 1898 New York Sun: “MME. AGNES Formerly a designer of the house of Doucet, she recently founded a business of her own, which her superb abilities and her charming personality rendered instantly successful.” Her publicized clients included the Queen of Holland. Agnès’ models were sold in the US by John Wanamaker as early as 1898 – 1899. The earliest label found so far is c. 1910-12, and shows an address at 23, Rue Louis-le-Grand, Paris.

By 1909, Les Modes refers to Mme. Havet as the Directrice of the House of Agnès. Mme Havet had previously had her own house, also as of 1898, although she had designed for other dressmakers previously. Mme. Havet’s clients under her own name included the Empress of Russia. Her success and drawing power were sufficient for her name to appear on the label. From 1909 on, the house is referred to as “La Maison Agnès, Mme Havet Directrice”. The house moved to 7 rue Auber, and the label was changed to Mme Havet Agnès 7 Rue Auber by the mid teens, quite possibly earlier. The fate of the founder, Agnès, is unknown at this time. James McCreery and Harry Angelo carried their models in the U.S., and the house was popular with American clients. 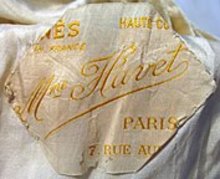