The Jaguar is found in Central and South America (as opposed to the leopard, which comes from Africa and Asia) although they have also been seen in Southwestern United States.

One simple way to distinguish the fur of the jaguar is to look at the spot pattern. Although we say leopards and jaguars have spots, some of the markings aren’t really spots at all. The markings form rings, which may or may not be solid all the way around. These are called ‘rosettes’. Jaguars have very large rosettes on their sides and backs. Some of the rosettes have spots inside.

There are three types of markings to note on a jaguar. On the neck and shoulders there are small, scattered spots. On the belly and back there are big rosettes. On the legs there are quite large, solid black spots.

The jaguar has become an endangered species due to the hunting of its fur. Farmers have killed jaguars because of cattle losses. Jaguars take cover in grasslands but are dying from smog and cutting. It is unlawful to import or export Jaguar fur. 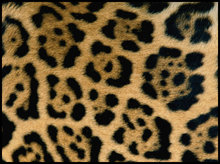 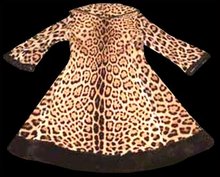