The following was adapted from a 2006 live workshop presented by Chris Riopelle.

Part I: The Beginning

Joe Famolare grew up in a third generation shoe making family. He was born in Boston and grew up in Chestnut Hill, which is a neighborhood/area on Boston’s south side. His father, Joe Sr., owned Famolare Shoe Engineering, which was opened in 1934. The company made cutting patterns for the shoe industry. Joe Jr. started working at the family business at the tender age of 12. Very cognizant of the child labor laws, Joe Sr. required him to pay income tax and file at that age. When Joe Jr. became the age of majority, he had already designed shoes and was a young executive at the family business.

Despite this early success, he deviated from the family business and started singing in nightclubs for tips! According to Joe himself: “I hated the shoe business. It was so dusty and boring, and the people didn’t seem happy. I could sing, and studied voice seriously, and I found that people liked to hear me sing. So I went to Emerson to be an actor.”

For the next several years, he attended Emerson College in Boston and pursued a degree in the musical theater. Midway through, his dreams were put on hold. He was drafted by the US Army. Joe served at the very tail end of the Korean War as a radio operator, broadcasting having been a minor in college.

After he left the military at age 23, he soon decided that singing was not the career for him. Despite his disenchantment with the shoe business, he learned that the long, highly irregular hours of a musical career and the irregular and meager pay he made by relying on tips was not for him.

Joe Sr. demanded that he could not just wander around “finding himself,” and that Joe Jr. needed to get a job. So, Joe Famolare was again huddled into the shoe business and he took night courses to finish a degree.

His decided deviation from his roots was short lived indeed. He melded his two interests by leaving the family business and being hired at Capezio, the renowned dance shoe business, in 1960. In the 1960s, American Musical Theater was in full swing.

Capezio was founded in 1887 by Salvatore Capezio and it still exists as a trusted source and household name for dance shoes, later fashion shoes, and now competitive ice skates.

During Joe’s tenure, he designed shoes for the Bolshoi Ballet and many others. Another highlight was designing for Twyla Tharp’s dance company.

His designs and selections also most notably appeared in the original Broadway Production of West Side Story. The “Dance Oxford” created by Joe especially for West Side Story is still in use on stage to this very day.

In my opinion, working for the theater not only gave him an understanding of what was required in active shoes but gave him a lot of inspiration on how to be a savvy, unconventional marketer and promoter of his product. One instance later found him skating on a float in a Thanksgiving Day parade to promote his shoes!

He left Capezio in 1965 over irreconcilable differences. Capezio was heading more and more into putting fashion before function, and wanting to break into the fashion market more while eliminating some comfort features in shoes, and Joe wanted to concentrate a little more on function.

His next stop along the way was in 1965, as an executive for Marx and Newman. He was in charge of their popular division, Bandolino shoes, that were sold at Neiman Marcus and other better department stores. He not only was Executive Vice President, but designed while he was there. Every model, whether a Famolare design or not, was selected by Joe. The company started to change when Mr. Newman left the business. At that time, Joe decided to leave.

In 1969, Joe formed Famolare shoes… and the rest, as they say, is history.

Part III: Joe “Gets There.”

Despite many naysayers who thought he was crazy, when Joe saw the “writing on the wall” at Marx and Newman, he didn’t cultivate his long list of business connections from all over the world. His business ethic and the personal commitment he made to the company just wouldn’t permit his conscience to do that.

He totally started from scratch with his new company. He had to start over with being the new guy pitching his ideas to investors to get nickel one. In the end, he charmed them with his ideas and sense of showmanship.

An early product was a molded clog, for which he won a Coty Award in 1973.

Even though the clog was a sensation in the fashion world from a design perspective, what really showcased Joe’s abilities as a self promoter was the “Get There.”

The Get There took the world of platform shoes by storm. 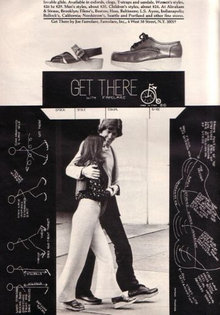 The secret behind the shoes was that while many platform shoes of the day left one teetering, the Famolare platform shoe was well balanced and practical.

The patented, four wave sole promoted posture and balance. Instead of having a main area of balance underneath the ball of the foot and then one under the heel with a hollow arch, creating the “figure 8” foot print, the foot print is a series of waves that help one “roll” and flow when they walk. The next ad appeared in magazines and newspapers everywhere as the “birth” of the Get There…
featuring an implication that the Get There was carved out of marble like a masterpiece sculpture. 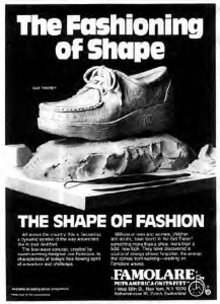 Not only did he use the traditional means of print advertising to promote his product, but he even choreographed the “Get There” dance and ran a contest for an aspiring song writer to perform the “Get There” song on a 45 rpm record. The record was released and it became the theme song.

Joe envisioned it as a yearly contest to find aspiring talent and spread the word about comfortable platform shoes that you could actually walk in! The annual event was not to be, but it was something that burned the Get There in everyone’s memory. They could read about it, dance about it, and listen to it!

The shoes not only hold a patent but are on display in the Smithsonian Museum, and are also featured at the Costume Institute of the Metropolitan Museum of Art in the New York. So the next time you are in the neighborhood… pay the exhibit a visit.

The Unisex Get There would be joined by several other models of the patented design.

To prove that platform shoes could be sexy, Joe turned his sites to the “Be Hi.” It featured a variation on the patented sole and was a bit closer to the traditional pump… with a difference.

The Bibianas by Famolare Collection featured a line of casual wedge sandals in 1974.

The Hilary collection was named for his daughter Hilary.

The “Hi There” was a nod to – 1970s style – the wedge look that had been popular in the 1930s and 1940s. It was introduced in the late 1970s and was contemporary to Candies’ high heeled wooden mules. It is reported that the “Hi There” did not perform as projected because the platform shoe was on the decline as a fashion statement. However, in the new millennium, they remain sought after by wearers of vintage fashion due to the popularity of the wedge heel. 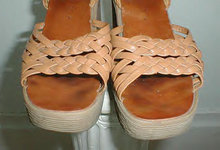 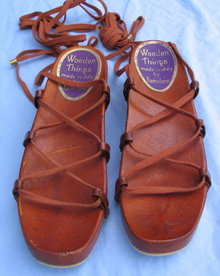 The dawn of the 1980s again saw Joe on the forefront of creative marketing. He teamed up with photography legend Richard Avedon for the “Footloose and Famolare” ad campaign. This time, instead of using models or diagrams, they featured Joe himself. Now that the craze for platform shoes subsided, Famolare continued with production, keeping his name linked to high quality footwear.

Shoes at this time featured a variety of sole types… the wave design and others. There was still an underlying message of comfort with fashion, but for the first time a more conventional pump was introduced.

If you notice, the shoes all have names. The earlier shoe line had “There or “Hi” affixed. There was also a “Dance There” in addition to what we have shown. This line played upon rhyming the founder’s name.

The Walkalare was a soft calfskin loafer and came in a variety of colors.

The Dreamalare was intended for “vacation wear” or street wear and almost brought to mind a much lower “Hi There” and came in a variety of heights. 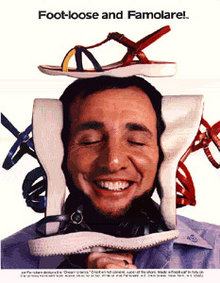 The “Golden Sole” was to provide comfort with dining and dancing all night long and was the true “dress shoe” of the line for ladies. It went from the dance floor to the boardroom.

Part VI: Joe’s Retirement and the Future of Famolare Shoes

As of this writing in late 2005, Joe is 74 years old and living in Vermont (his adopted state). He is married to the same woman he met at Emerson College in his 20s and has grown daughters.

In 1989, he licensed his company and retired. Information differs here, however. Some sources report that the name was licensed earlier in 1987, and he did regain the rights to the Famolare name in the 1990s.

Joe Famolare was inducted into the Fashion Association Hall of Fame in 1995. Retirement bored him, so he turned an old farm into the Vermont Agricultural, Business, Education Center (VABEX). There is a nursing school, buildings for Famolare shoes, land trust societies, and Vermont College.

His other major project is bringing business (both domestic and international) back to the city of Brattleboro, Vermont. Many Canadian and International businesses left over the years. He has also worked with his daughter, Hilary, to create a Foreign Trade Zone to fight escalating property taxes as we as to combat abandoned empty warehouses left in the wake of Georgia-Pacific Paper and other companies abandoning the area.

What is next for Joe Famolare? He certainly is a busy guy. As of a conversation with a Famolare Shoes employee, he is still involved on a day to day basis with Famolare shoes. He has an office, and although he is no longer involved with every aspect of the company, it is still very much his child.

A commonly asked question is how does one identify vintage Famolare shoes from modern?
Aside from just inherently knowing what style elements are typical of different decades and years in general, one way is to look at the “label” so to speak. “Famolare” is imprinted on the inside of every show. In contemporary shoes, this will be in very angular, block letters. In shoes that were produced from the beginning up through 1987-89, to the best of our knowledge, the characters are more Arabic, or rounded in style. Occasionally, script was used.

The bicycle is the company trademark, and is present on almost all Famolare shoes. Joe selected this image based on his fascination with the tall bikes that he saw on the streets of Italy during his tenure there. Now, the company is held under the appropriately named Bicycle, Inc. 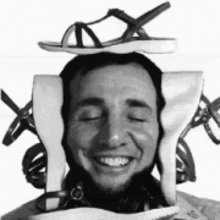