Helen Rose (1904 – 1985) studied in Chicago before journeying to Los Angeles in 1929. She started with Ice Follies costumes and designed musical sequences for Fox under the direction of Fanchon and Marco. She went to Twentieth Century Fox in 1943 and signed with MGM in 1944.

Rose stayed with MGM until the 1960s. She was much admired by the stars of the 1950s, especially the younger women she dressed while Irene tended to the more established players. She was considered a strong designer for musicals which had become MGM’s focus. Rose’s best film work was fashion oriented rather than historically accurate. As a film designer and a fashion designer, she often used the same fabrics for both, despite the fabric being incorrect for period films. Rose’s wedding dresses became a must for the likes of Elizabeth Taylor, Ann Blyth, Jane Powell, Debbie Reynolds, and Pier Angeli among others. 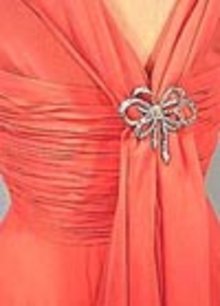 Like Adrian and Irene before her at MGM, Rose often adapted her film designs for ready to wear, even as unlikely a candidate as a Roman Cape from Quo Vadis in 1951. This hooded coat sold for $40 in a fabric of acetate, rayon and Orlon. She also adapted her sketches from The Merry Widow and Escape from Fort Bravo, but they were apparently never produced. One of her most influential film designs was the chiffon cocktail dress worn by Elizabeth Taylor in Cat on a Hot Tin Roof. This dress only had 50 orders at her first showing .

Then the film was released, and the dress was a hit. Rose sold the dress for three seasons. Thousands were made and it was copied extensively. With the help of Kathryn MacMillan , formerly the head seamstress at MGM, Rose produced expensive gowns that were often adaptations of her film designs. Rose also gave the world Princess Grace’s highly copied wedding gown in 1956.

Rose sold both custom and ready to wear at her House of Helen Rose, and her lines were sold across the country into the 1970s. Her designs appealed to the more mature woman, with beaded bodices, chiffon skirts, and sophisticated luncheon suits as her specialties. She was especially partial to chiffon, using it effectively for years. Rose’s label dates from 1958/9 – 1976, when she retired. Her 1976 autobiography is Just Make Them Beautiful. 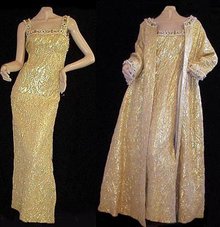 Representative Films: 1943 – 1967 : Hello Frisco, Hello, Stormy Weather, Ziegfield Follies ( w/ Irene and Irene Sharaff), The Harvey Girls ( w/ Irene), Till the Clouds Roll By, Merton of the Movies, Take Me Out to the Ballgame, The Stratton Story, On the Town, Annie Get Your Gun, Father of the Bride, Summer Stock, Father’s Little Dividend, The Great Caruso, The Belle of New York, The Merry Widow, The Bad and the Beautiful, The Million Dollar Mermaid, Dream Wife, Mogambo, Torch Song, The Long, Long Trailer, Rose Marie, Jupiter’s Darling, Hit the Deck, Love Me or Leave Me, The Tender Trap, Forbidden Planet, The Swan, High Society, Tea and Sympathy, Designing Woman, Silk Stockings, Cat on a Hot Tin Roof, The Mating Game, Ask Any Girl, Butterfield 8, The Courtship of Eddie’s Father.