Hattie Carnegie (1889 -1956) was born in Vienna, Austria. Her name was Henrietta Kanengeiser. In 1900, she immigrated to the United States, and settled with her family in New York City. There is a famous story that while on the ship to America, Hattie asked a fellow voyager about who the richest and most prosperous people in America were. The answer was, “Andrew Carnegie” and according to the story, young Hattie decided to change her name to Carnegie. Eventually the rest of her family dropped Kanengeiser and adopted the Carnegie name, a practice that was common among immigrants. 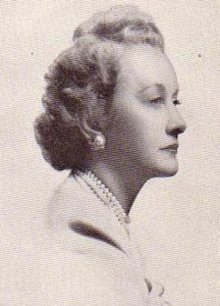 By the time she was a young teenager, Hattie was already working. She worked at various millinery establishments, and at Macy’s. But in 1909 she, along with friend Rose Roth, opened her own business, a tiny hat shop. It was called “Carnegie – Ladies’ Hatter.” They also sold dresses, which were made by Rose, as Hattie could not sew. Hattie did the hats. The place was a huge success, partly due to Hattie’s sense of style and appearance, and four years later they moved to a larger place and were able to incorporate as a business.

As the business grew, Hattie and Rose were able to hire workers who made the designs that Hattie developed. At this time, ALL fashion came from Paris, and so Hattie studied the Parisian styles, choosing only the best, and adapting them for her customers. And while she could neither sketch nor sew, Hattie was very good at communicating to her workers exactly what she wanted them to do.

In 1919, Hattie bought Rose Roth’s share of the business, and Hattie Carnegie, Inc. was born. This was also the year of her first buying trip to Paris. As I said before, during this time it was generally believed that all good fashion originated in Paris. It was common practice for American specialty shops like Carnegie’s and Bergdorf Goodman to go to the Paris shows. They would buy dresses and bring them back to America where they would be adapted and/or copied for the American market. The best description of this practice is in Elizabeth Hawes’s book, Fashion is Spinach, another vintage book that I highly recommend to students of fashion history.

Notice the mention of adaptations, in this ad from 1921, but also notice that she was importing “foreign creations”. Carnegie continued this practice throughout her career. One could buy a Chanel at Hattie Carnegie, or they could buy her interpretation of Chanel’s work.

Carnegie made as many as seven trips to Paris a year, and even kept an apartment there. At the height of her influence (the 1930s), Hattie Carnegie was buying as many as 75 dresses from each Paris collection!

Until 1928, all the dresses at Hattie Carnegie were made to order, but in that year she started her first ready-to-wear line. Also in that year, Norman Norell was hired to design the ready-to-wear line. By this time, Hattie’s business had grown to be the size of a small department store. In 1929, before the Stock Market Crash, she did $3,500,000 worth of business! And at first the Crash seemed to have little effect on the business at Hattie Carnegie, but then many of her formerly wealthy patrons found they could not pay their bills. Carnegie decided to start a new division which was much lower in cost per dress. This new line was called Spectator Sports, and dresses in that line sold for about $40 each (Still high for 1934, but much lower than her custom work!) 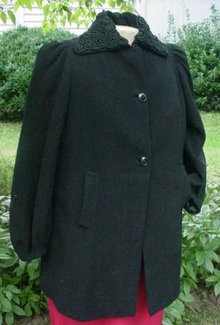 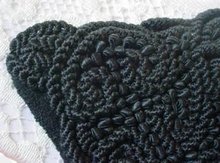 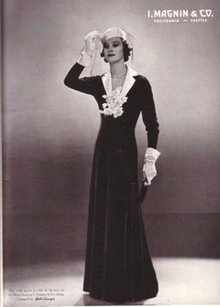 All the items seen in the above ad – dress, hat and gloves, were offered at Hattie Carnegie and at better department stores and specialty shops around the country.

She had begun selling her ready-to-wear dresses, hats and accessories in stores around the country by the late 1930s. Her clothes were particularly popular in California, and many Hollywood stars were known to wear Carnegie’s clothes. This helped spread her reputation and helped establish her as a taste-maker across the country. She also began to market her cosmetics and perfumes in stores across America. She was well-known enough to be asked to endorse other products.

So, in spite of the Depression, Carnegie’s business thrived. She opened even more departments in her store. It was said that a lady could be dressed from “Hat to Hem” at Hattie Carnegie (the one item she did not have being shoes!) By the 1940s, Carnegie’s store was actually a department store. There was a handbag shop, where a customer could order a bag to match an outfit or hat, the fur salon which was next to the Custom Salon, a millinary shop and a ready-to-wear hat shop, her jewelry department, an antique shop that sold furniture, china and glass, a cosmetic and perfumes department (some of which were packaged in Lenox china containers), the Jeune Fille shop which sold Spectator Sports and ready-to-wear from other design houses.

Hattie Carnegie is very often associated with elegance and high fashion, and even her ready-to-wear and more casual clothing always had a touch of the elegant. Carnegie’s fashion philosophy is often summed up as ‘the woman should wear the clothes, not the clothes wear the woman’.

By 1940, Carnegie’s operation was so large that it employed over 1000 workers. Most of them worked in the manufacturing of her ready-to-wear lines, but her custom shop continued to be the foundation of her business and reputation. Carnegie became known as a woman of taste, and she was so renowned that she was often featured in her own ads.

Hattie Carnegie’s jewelry is highly prized and collectible today. This elegant set dates to the early to mid 1940s. 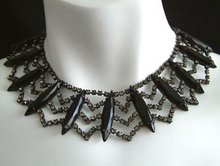 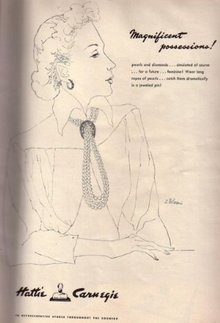 During the War, Carnegie continued to be a leader in the American fashion scene. But because access to French fashion and fabrics had been curtailed, she had a very prominent place in the fashion publications of the era. And during the War, she began to rely more on American fabric designers and manufacturers, and she continued to use them even after the War ended.

After the War, there was a new feel to fashion, which was summed up in a feature in Life in 1945:

“Custom-made Fall clothes give U.S. women best chance to splurge since War began. This winter American women will feel free to dress up as they have not dressed up in four years. What they will wear has already been determined… and, this year, will make U.S. women more expensively and prettily dressed than they have been for almost two decades.
New York’s custom dresses are high fashion, right now the best and most varied in the world. They are the ultimate big-city expression of the small main-street dressmaker. Usually they are rather conservative, which makes them stay in style longer and seem a good investment to those who buy them. This year most of the dresses tend to ballooning skirts, smaller waists and rounded shoulders.”

Interesting, as this was two years before Dior’s ‘New Look’. 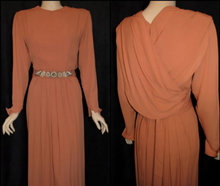 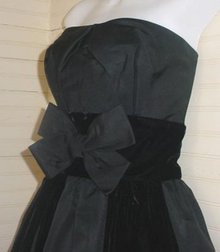 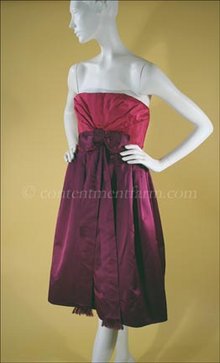 During the 1950s, Carnegie continued to make the types of clothes that women across the country had come to expect from her – chic but conventional dresses and suits. She especially liked the little black dress, and was known for using a particular shade of blue – “Carnegie Blue.”
She continued to make hats, accessories and jewelry. During the 1950s, Carnegie also produced ballgowns, often adapted from the French couturiers. 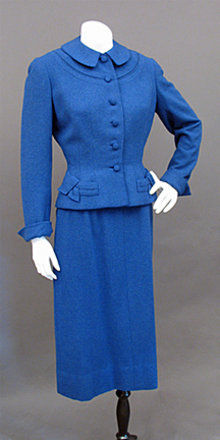 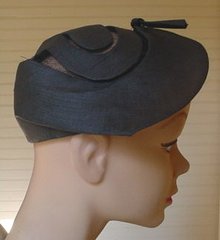 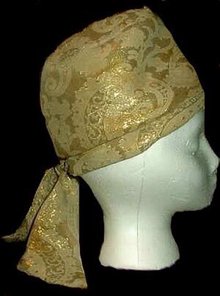 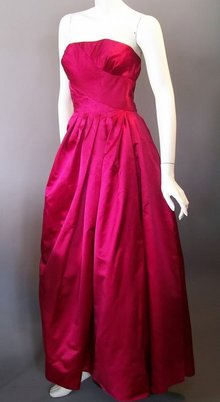 Hattie Carnegie died in 1956. Her business remained open, first under the direction of her husband, John Zanft, and then by a former employee, Larry Joseph. Unfortunately for the business, much of the desirability of the label lay in the woman herself, and after her death, the label lost a lot of its luster. The Custom Salon was closed in 1965, but the company continued to produce jewelry, hats and accessories. The business closed for good in 1976.

One of Hattie Carnegie’s most important legacies to American fashion was that her workrooms were a sort of fashion designer incubator. Starting with Norman Norell, in 1928, there is a long and impressive list of noted designers who passed through the Carnegie organization. Some sources note that part of this was that Carnegie herself was notoriously hard to get along with, so many talented designers left after a short time with her, but all agree that she had an amazing ability to recognize design talent.

Unfortunately, these designers were never given credit on the label for their work. Many collectors look for Carnegie garments that show characteristics of the work of these famous designers.

Norman Norell – 1928 -1940
Norell started working at Hattie Carnegie after designing movie costumes. He worked primarily in her ready-to-wear division, but he often went with her on her trips to Paris. In this manner he was able to study the construction and quality of French couture clothing, which he was able to incorporate into his ready-to-wear designs. Norell left Carnegie in 1941, reportedly after an argument over a sequined skirt. Even so, years later he said, “I learned everything I knew from her.”

Travis Banton – late 1930s
Details are sketchy about Banton’s time at Hattie Carnegie, but I think it must have been after he was fired from his job in Hollywood because of his drinking problem.

Claire McCardell 1938 – 1940
Claire McCardell went to work at Hattie Carnegie after the firm she was working for, Townley Frocks, closed. She was to design a new, elegantly casual line called “Workshop Originals.” However, it was not a good fashion fit, with McCardell’s casual approach to clothing sharply contrasting with Carnegie’s more chic image. McCardell left after only 2 years.

Jean Louis – 1935-1942
Jean Louis’s first design was sold to movie actress Irene Dunne. In his 7 years at Carnegie, Louis designed for some of Carnegie’s highest profile clients, including the Duchess of Windsor. He left Carnegie in 1942, and eventually went to Hollywood where his old friend Irene Dunne helped him get work in the movies.

Gustave Tassell – late 1940s – 1952
Tassell started at Carnegie as a display designer, but ended up being so interested in the clothes themselves that he began designing. “I had never known before that clothes could be so beautiful or that women could look so wonderful as they did in the Hattie Carnegie custom-order clothes, “ he wrote.

Pauline de Rothschild 1943 -1953
Pauline Potter, or de Rothschild, was hired in 1943 to replace Jean Louis. She was put in charge of the Custom Salon. 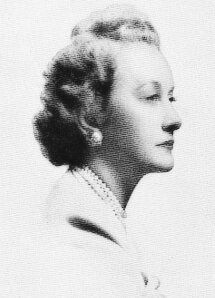