Madame Alix Gres (1903-1993) was actually born Germaine Emilie Krebs in Paris. She began as a sculptor, but never had a fruitful career. Frustrated, she began to design toiles for a design house in Paris. That’s when she decided to try her hand at fashion design. 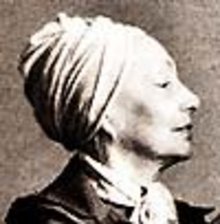 She opened her first house under the name Alix Barton. She designed silk jersey dresses with simple lines and draping, and began gaining some publicity in fashion magazines. Her house was simply named “Alix”.

She felt that the true job of the couturier was not create a name for him/herself, as many designers do, but to pay rigorous attention to the clothing.

Her training as a sculptor influenced her clothing designs. She once created a dress modeled after the Louvre’s Nike of Samothrace. Alix created many of her gowns from silk jersey which she draped and pleated and cut on the bias.

Madame Gres used live mannequins when designing her gowns. She would take pieces of fabric and drape and pleat them right on the models.

From these pictures, you can see the simplicity of the lines in her earlier work, but how well it contoured the woman’s body. They were sophisticated, clean, clung in the right places, and always elegant. The wrapped dresses show her Greco-Roman sculpture influence.

In the late 1930s, she married Serge Czerefkov, sold the rights to the name Alix and adopted Gres from her husband’s first name, spelled backwards.

By the time the war hit, Madame Gres had become a world famous designer. Even though she was Jewish, German soldiers asked if she would design dresses for the wives of German officers. She refused and they closed down her design house. It was a very quiet time for Gres during the war. 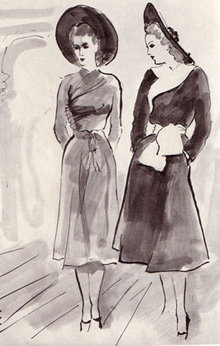 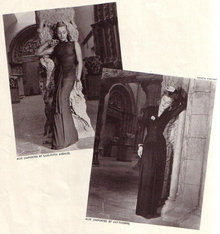 After the war, she began creating her infamous Grecian pleated dresses. Some of these dresses took 300 hours to make. Each pleat was done by hand and had to measure more the 1 cm. wide. The Grecian style dresses were made of one or two pieces of fabric. She draped the cloth over the model and “molded” the design over the body, so the body shaped the dress, not the other way around. This particular dress was made of two pieces-the body and the shoulder.

As you can imagine, designs like this cost a fortune to make. Because Madame Gres was so unwilling to compromise the reputation of true couture, she despised mass production and dressed diplomats’ wives rather than movie stars and other very public people. Instead, she preferred to have her pieces be worn by women of culture who led quiet, private lives.

In the 1950s, she began “tailoring” women’s suits, but of course a Gres would not be a Gres without some sort of wrap. 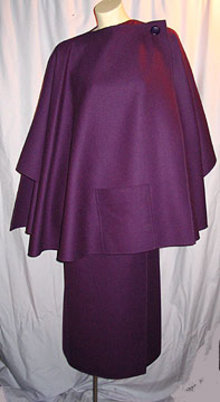 As you can imagine, creating dresses with pleats 1 millimeter (correction) wide, can get very pricey. She would visit museums for inspiration for her sculptural creations. She continued to make her gowns into the 1950s, 1960s and 1970s.

She launched a fragrance line, but had to sell it to keep her couture going. The woman who demanded the finest quality and attention to detail had to take the step towards ready to wear clothing in the 1980s.

In 1987, the house went bankrupt. The name was bought by a Japanese fashion distributor and it became wildly successful in Japan. The present designer Koji Tatsuno pays homage to Madame Gres by continuing the draping style in a more modern way.

When the house went bankrupt, many of the patterns and samples were destroyed. There are few Madame Gres creations out there and, given how few people were privileged enough to own one, the label is an elusive legend.

Madame Gres died in 1993 in obscurity. A winner of the Golden Thimble award was forgotten, but her legendary creations live on.