Tartan is traditional Scottish right-hand twill weave wool in distinct criss-cross patterns. The pattern is called a sett. Each tartan is tied to a clan, regiment or district of Scotland, and there have gradually been added further officially-recognized tartans, such as those of Canadian provinces and U.S. states. All tartans are registered in Edinburgh, by the Scottish Register of Tartans, maintained by the National Records of Scotland. All tartans are plaids, but no plaids without official recognition should use the name tartan.

For each clan there may be a number of official tartans, such as dress, hunting and ancient (which use more muted colors—from the days of natural dyes). Originally worn as the belted plaid (long straight shawl belted at the waist), then the pleated, wrapped kilt, tartan has also historically been worn in the form of trousers, or truis.

The best known tartans are generally thought to be Royal Stewart and Black Watch.

Now tartans may be made of any fibers, but still are most characteristically wool.

The origin of the word tartan is thought to come from a combination of the French tiretain (probably derived from tirer, “to pull,” referring to a woven cloth) and the Gaelic breacan, “many colors.”

Uses: Kilts, plaids and trousers are traditional, also now used for everything from coats to evening wear 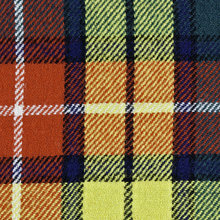