A woven or printed design motif used in any color combination, on any fabric, for any use, paisley is very recognizable. It is a modified teardrop shape, with the point of the drop rounded over.

The name paisley comes from Paisley, Scotland. In the 18th century, Paisley produced cashmere, silk and wool shawls in imitation of very costly and elaborately woven cashmere shawls from Kashmir, India. The shawls, both from Kashmir and Scotland, featured the pattern that came to be called paisley. The symbolism of the motif has a very long history in Asia and the Middle East, and its history in Europe dates to the 18th century.

The most recent wave of intense Western popularity for paisley came in the 1960s, with the renewed interest in Eastern (particularly Indian) culture and belief. 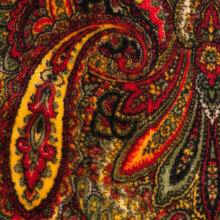 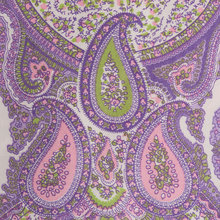