Very popular in the last several decades of the 19th century, mill engravings were intricate prints made by hand engraving steel rollers, which would then be used to emboss larger copper rollers by repeating the pattern evenly over the entire roller. Copper was not as durable as steel, but steel was hard and difficult to engrave. When the copper roller became worn, the original steel pattern would be used again on the smoothed-off copper roller, or a new pattern would be used. 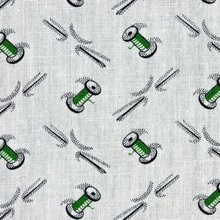